One of the most exciting low-carb recipes is potato pancakes (also known as latkes). I had to give them up for a long time, since my wife didn't like them. When I read this recipe, I had to try it. Since then, I've been making them regularly. Once you've tasted them, you'll never want potato pancakes made from potatoes again. If you're not already skeptical_(and I was), the basis for our pancakes is sauerkraut.

To serve 2 people as a main course or 4 people as a side dish, we'll need 1 pound (500 g) sauerkraut. Put about 2/3 of the sauerkraut in a mixing bowl along with a roughly diced onion and mash it very finely with an immersion blender. Then add the egg and 2 oz (50 g) gluten. (The original recipe called for 2 eggs and no gluten, but it tasted more like an omelet than potato pancakes.) Season with 1/2 dsp salt, pepper, and grated nutmeg. I always add a shot of Maggi and a touch of chili, but this is optional. If the sauerkraut isn't fluid enough, add a little milk or cream so that it becomes a stiff liquid mass. Mix well and then add the rest of the sauerkraut, which will give the pancakes "bite". 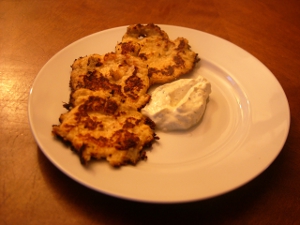 Now put some butter and olive oil into a skillet and fry the pancakes over medium heat. You should start with very small pancakes (1 tbsp of batter per pancake), since turning them can be difficult. The window of time between "Yay, it's not sticking to the skillet!" and "Crap! Burned it!" is smaller than for pancakes using actual potatoes. So stay close to the skillet and watch for when they're ready to turn. When you have the technique down, you can make the pancakes slightly larger. I was dumb and did it the other way around!