My attack on "God's own country" last week was not without consequences. 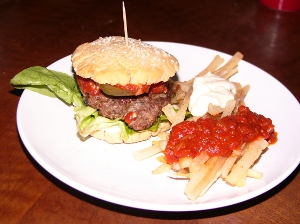 At risk of becoming a victim in the War on Culinary Terror, imprisoned in a camp with only bread and beans to eat (a low-carb fan's version of torture) and subjected to cola-boarding, it's time for the rehabilitation of American cuisine.

We'll start with THE classic American dish: a burger and fries. Amazingly, the low-carb version is delicious and - unlike the McDonald's version - very satisfying. Of course, we used only the best ingredients.

The idea for the fries came to me suddenly. Last week I made salsify and thought that it would work well as a potato substitute for fries. It worked perfectly and, once fried, they were almost indistinguishable from the "real" thing. One problem was that my wife wanted soft American-style buns for the sandwich so that it would have the authentic burger texture. This is only partially successful, since baking powder doesn't work very well with almond flour. (I'll report back when I find a solution.) They didn't rise as well as I expected. But other than that, they were very soft! 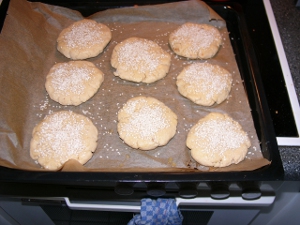 In any case you should start with the ketchup, because it has to simmer for at least 2 hours (preferably 4). Fry the onions in a little olive oil, add the tomato puree (canned is tastier, and in the winter more eco-friendly, than fresh tomatoes), salt, spices, and vinegar. Then simmer uncovered over low heat. Finally, add sweetener to taste.

The buns are very easy. Melt the butter in a saucepan. Mix dry and liquid ingredients separately, reserving some butter. Then pour them together and knead into an evenly-mixed dough. Divide the dough into 6 roughly equal parts, forming each into a circle approx. 1 cm thick and 10 cm across. Spread remaining melted butter on a baking sheet, sprinkle buns with sesame seeds, and then bake them at 370° F (180° C) for 20 minutes, until they begin to brown. For crispier buns, add an extra 5 minutes.

Mix the ground beef with 2 eggs, minced onion, and a clove of garlic. Instead of using bread crumbs to make the meat stick together, we'll use almond flour. Shape the ground beef mixture into patties the same size as the buns and fry on both sides for 2-3 minutes at high heat.

Now assemble the burgers. Slice the finished buns in half and spread mayonnaise on both halves. Then put a lettuce leaf and a hamburger patty on the bottom half. Next add ketchup, a tomato slice, 2 pickle slices (unlike other pickles, sour pickles contain almost no carbs), and then the top half of the bun. Secure with a toothpick so that the burger will be easier to eat.

Meanwhile, wash and peel salsify, then cut into fries. Blanch in salted water for 8 minutes (no longer, since they need to remain crisp).

Drain them well and then fry them for about 3-4 minutes. We don't have a deep fryer, so we heated 500 g_(1 pound) of palm oil in a pan instead. (It should be real palm oil, Palmin or similar, so that it has a neutral taste and can get very hot.) We fried the salsify fries in 3 batches, since that was all that would fit in the pan at one time. The stove is now doing all it can. Stir fries often, and after 3-4 minutes remove them with a slotted spoon, drain them, and sprinkle them with a mixture of sweet paprika and salt.

TIP for working with salsify

Before starting, I was warned that salsify turns your fingers black. This is nonsense. BUT: They do produce milky sap that sticks to your fingers and leaves nasty stains. If you don't want to scrub your hands for hours, wear gloves and an apron. By the way, many tables say that salsify has an astronomical 16% or more carb content. They're wrong - that is the value for dried salsify. Fresh contains less than 2%, making it an excellent low-carb vegetable!

When eating, make sure you have one or more napkins at hand. Small children should wear a bib. And then grab a burger!