Chocolate is the stuff that causes many a diet to fail. Since we always have chocolate at home, we never though of giving it up for our low-carb diet.

But we'll get straight to the point. You don't need any special equipment to make chocolate that contains almost no carbs. Chocolate is simply a mixture of fat, cocoa, milk powder - and normally sugar. The sugar usually presents the biggest problem, since it has to be very finely ground. We don't have this problem, since we only use liquid sweetener.

We use a mixture of half palm oil and half butter as a base. Actually we should use cocoa butter, but it's harder to get and more expensive, and our mixture tastes just as good.

When we make chocolate, we usually make a lot. To make approx. 2 pounds of chocolate, we use half a pound each of palm oil and butter. This mixture is dissolved in a bowl of water. Then we add 5 dsp. of liquid sweetener to it. If you like it sweeter, add more. Next, stir in half a pound cocoa powder. We started with plain cocoa powder from the supermarket. After an informative visit to a deli, we discovered that there's a wide variety of qualities and flavors available in cocoa powder. Since then we've tried several kinds and are very excited by the results. Our current favorite is Bensdorp KAKAO, which is available in well-stocked markets in Germany and has the best value-taste ratio. It's still worthwhile to visit specialty shops, though. For the strongest-tasting varieties, quater of pund will be enough. 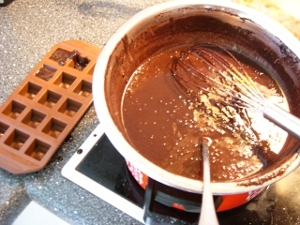 The next ingredient to stir in is the powdered milk. Unfortunately, almost all commercially-available powdered milk is low-fat. Besides the fact that a higher fat content wouldn't bother us, this has the drawback of a high lactose content. For low-fat powdered milk, this is 55%. Since we're using half a pound of powdered milk, this means almost quater of puond of sugar in two pound of chocolate. This amount is acceptable, because even if you at 2.6 ounces of chocolate per day, it would result in a carbohydrate intake of a fifth of an ounce. Still, it would be better if you could get powdered milk with less sugar. We recently tried powdered cream, which has a sugar content of less than 25%. That way the amount of carbs in the finished chocolate will be under 5%. The powdered cream is a good option as far as taste, and it was also an advantage for the consistency of the chocolate. Our reader Patrik has found a supplier, but unfortunately it's not cheap.

But back to making chocolate. Stir everything in the pot very well. A good chocolatier lets his or her mixer run for up to three days. Of course, that isn't practical for homemade chocolate; not many people have a temperature-controlled mixer in their kitchen. I usually stir for 15 minutes and everything turns out fine.

That was the hard part. Now comes the fun part: when you make chocolate at home, you're free to experiment with other ingredients and flavors. One tasty addition is slivered almonds, which we toast in butter until they're golden brown. A particular highlight is when the almonds are also caramelized. To do this, I add 2-3 EL Sukrin to the almonds at the beginning, along with the butter. When the whole thing turns light brown, the almonds are both toasted and caramelized.

TIP: Don't put the toasted almonds directly into the chocolate mixture. Let them cool in a bowl first. While the almonds are cooling, wipe the hot pan with a kitchen towel. Cold will make the caramelization stick to the surface of the pan!

You can use hazelnuts and walnuts just like almonds, although they will slightly increase the carb content. We also like to add natural or artificial flavors to our chocolate. Bitter almond and cinnamon give it a Christmas-like flavor. You can also add orange zest or orange flavoring. In summer we like to eat lemon- or chili-flavored chocolate. Real vanilla and rum produce an especially good result. At this stage, imagination and creativity know no bounds. The one thing to keep in mind is that you shouldn't add too much liquid. Otherwise, the chocolate won't set. 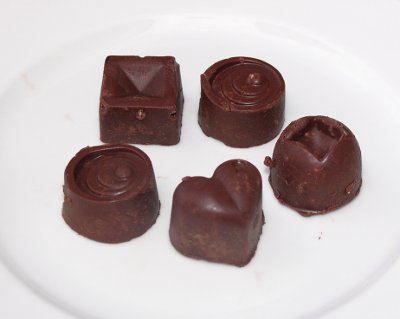 Finally, it's time to put the chocolate into the form in which you want to enjoy it. The easiest way is to spread it thinly on a cookie sheet lined with parchment paper. We even got the chocolate molds made out of silicone, mainly because they fit into the fridge better.

This brings us to the only downside of our chocolate. Professionals temper chocolate before pouring it into molds. This means that the chocolate is heated to various temperatures and then cooled again, according to a precise plan. This ensures that the end product contains crystal structures that only start to melt at temperatures above 85° F ( 30° C). We don't go that far. Our chocolate won't melt at room temperature, but some of the crystals will melt when you handle it, so we always store the chocolate in the fridge. This does have the advantage that you can't give low-carb chocolate as a gift. We eat it all ourselves!