A very simple substitute for potatoes in puree is celery. It requires much less peeling, because instead of peeling 5-6 potatoes you only have to discard the peel of one celery root. We cut the celery into cubes of the same size that we would cut potatoes and cook them in saltwater with a TL of fresh horseradish, which removes some of the bitter compounds. After 20-30 minutes the celery will be nice and soft. Then we drain the water (which I've used to make a great soup) and mash the celery into a pulp.

Celery Puree as a side dish to serve 4: 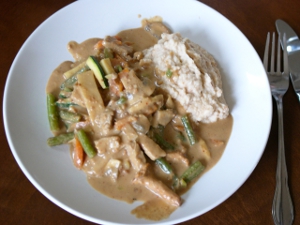 Next I add a cup of cream, followed by the milk. If you're no longer worried about fat, you can add a few pats of butter, too. For seasoning we add freshly-grated nutmeg. Salt to taste once more. Then comes the hardest part of the whole thing: we beat the puree with a whisk until it's nice and creamy. It's hard to believe, but the beating affects the taste.

Wives, this is a chance to demonstrate your strength and endurance to your other half!