"The fattest farmer eats the most potatoes."

At least, that's how it went with the farmers of old. Since we didn't want to give up the wonderful Upper Hessian potato salad we grew up with, we've devised a tasty and very similar salad - with turnips! 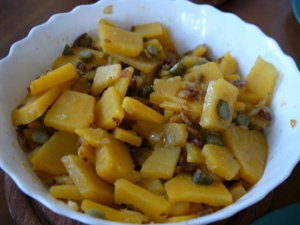 At this year's New Year's Eve party, we put a bowl of this salad on the buffet without saying anything. The experiment was a success. It was one of the only salads to be eaten up entirely (which speaks for itself). While we were eating some, a friend approached us and said, "I thought you guys didn't eat potatoes!"

Peel turnips and cut into thin (1 inch/2-3 mm) even slices. Before cooking, they should already look like they do in the picture. Boil them in salted water for about 30 minutes. After cooking, drain the water and steam the turnip chips. This will make them take the salad dressing better.

Now fry the diced bacon in olive oil. Add the chopped onions and lightly brown them. Then add pickle juice and vegetable stock. A word about pickles: normally they are no more than 10% sugar. It's an acceptable amount as long as you don't eat too many. The grocery store where we go also has pickles preserved in brine. These contain almost no carbs.

If we don't use too much water to boil the turnips, but instead put in just enough water to cover them, the broth can be used as a base for soup later. I was amazed at how good the turnip-boiling water tasted. Just add 1 cup (200 ml) cream and half cup (100 g) almond flour and boil it, and you've got a fantastic turnip soup.
We can also add some of the brine, but with a warning: "Careful, this is really salty!" 1 cup (200 ml) is plenty. We won't need to salt it any more. If you'd like your salad to be spicier, add some balsamic vinegar and/or garlic. Pour the sauce and the diced pickles over the steamed turnips. Finished! An attractive and flavorful side dish with almost no carbs.