Christmas is drawing near, and as you probably know from reading Delicious Low Carb, this means that we'll soon have guests and a festive menu. We decided to use wild game this year, and last Sunday was our first attempt. A good roast needs dumplings to go with it, so I tried a few popular recipes from the Internet. I didn't think liver dumplings would be appropriate and I was unimpressed by my first attempt with tofu dumplings. Tofu just tastes bland, and the dumplings weren't firm enough. Then on Saturday I went to the cheese shop (we have a great one in Offenbach!) and had an idea: their ricotta was beautiful, soft, and delicious. We could use it to make dumplings! So once again, I stole a recipe from the Lanz show and invented a low-carb version. The results were fantastic!

We bought the boar directly from a hunter. Since there are currently too many wild boars living in the forests here, hunters will sell you the meat cheaply.

We blotted the boar haunch with a kitchen towel, larded it with white bacon, and then salted and peppered it. (Larding is very simple. Using a sharp knife, make a 3-4 cm deep cut in the meat and then insert a strip of bacon into the cut.) Then we seared the haunch on all sides. We put two finely-chopped onions, the garlic, and the red wine into the roasting pan and seasoned the meat with thyme and coriander. Then we put the meat in the oven, covered the roasting pan, and cooked it at 195° F (90° C) for 2 1/2 minutes. After cooking we added almond flour to the sauce to bind the ingredients together. Depending on your taste, you can add more salt or pepper at this point. 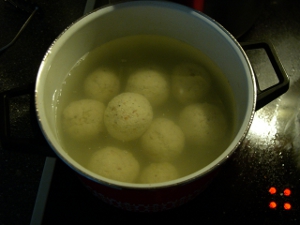 Now the special part: the dumplings. We added two eggs, a finely grated carrot, and the almond flour and gluten to the ricotta, then kneaded everything to form a stiff dough. The dough should not stick to the bowl. Then we formed about 10 dumplings. We filled a sufficiently large pot with water and 1 dsp salt, boiled the water, and then turned the heat down to the lowest setting. When the water was no longer bubbling, we added the dumplings to the pot. They should remain in there for 40 minutes.

For our glazed chicory, we once again modified a Lanz recipe to make it low-carb. We put 2 large EL low-carb honey in a pan and lightly browned it. Next, we added 100 ml_(1/2 cup) white wine and some vinegar. This was reduced until a viscous mass remained in the pan. We added the butter. Then we quartered the chicory and added it to the pan. While this simmered over low heat, we repeatedly spooned the sauce over the chicory. The chicory should be finished after about 20 minutes. 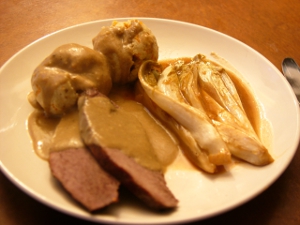 The main course of a very special menu is ready.