The Queen of Desserts

In our opinion, the queen of desserts is creme brulee: rich, warm egg cream with orange zest, real vanilla, and of course a crunchy caramel crust. It's hard to imagine a more luxurious ending to a fancy dinner. Although we made an exception to our low-carb rules at Christmas and used a little sugar for the caramelized crust, we have since found a solution. Sukrin is a sugar alcohol that consists of 100% carbohydrates, but the body can't process it and it won't stimulate insulin production. 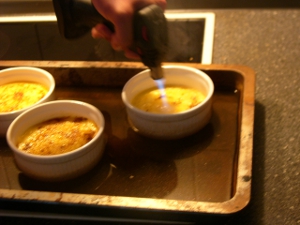 Although it's different from regular sugar, there is one important similarity. Sukrin can be caramelized!

Making creme brulee isn't rocket science as long as you have the right hardware. Success depends on how the creme brulee thickens while in the oven. You'll need ovenproof ramekins that are 10 cm across and 4 cm deep. These are then half-filled with the cream and placed in a water bath in the oven at 300° F ( 150° C). If you use different bowls, the creme might not expand or accumulate above or below the water.

But let's start from the beginning. With a knife, scrape the pith from the halved vanilla pod. Use a pestle to crush it finely with 1 tbsp Sukrin. Grate the orange peel. Mix both with cream, milk, egg yolk, and sweetener to taste. Now we're ready to pour the mixture into the ramekins. It takes 30-40 minutes for the creme to thicken in the water bath. Check them often and tap lightly on the ramekins with a spoon. It tastes the best if you remove them as soon as they finish solidifying. You can now chill the creme, but we think it tastes best when it's straight from the oven and still hot. Evenly distribute half a tablespoon of Sukrin over the surface of each ramekin. And now hardware comes into play again: you'll need a very powerful top heating element or a kitchen blowtorch. Brown the Sukrin until it begins to bubble. 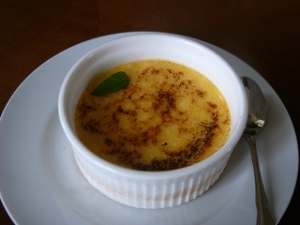 Some people might think this is too much expensive equipment to make a dessert, but that's not true. The result is so amazing that it's worth it - for the queen of desserts!