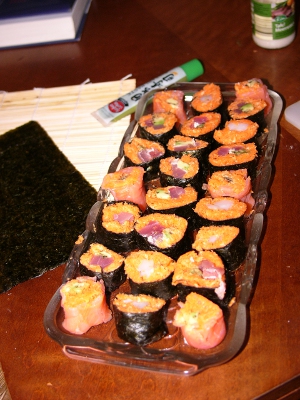 If you've been reading this site for a while, you won't be surprised that one of my life mottos is:

That said, I couldn't get motivated to make sushi for a long time because my wife doesn't enjoy it. I like it. But a cook wants to be applauded! So for a while, I put off cooking Japanese food. Then recently we saw some beautiful thin smoked salmon fillets in a store, and I put my foot down: "I'm making this and you've got to try some!" I did promise not to make too much sushi the first time. Against all expectations (my wife is pretty stubborn), her verdict was: "This tastes really good. I would never have guessed." There was no stopping me now, so I went to the Asian grocery and got all the equipment necessary for making sushi. The fish seller at the market provided fresh tuna fillets and scallops.

Actually, our low-carb sushi is only different from normal sushi in one way: we use carrots instead of sticky rice. That may sound crazy at first, but if the carrots are cooked properly they'll go well with the fish. The flavor is not overpowering, which lets the taste of the raw fish come through. It also harmonizes well with the horseradish. (I sometimes just use normal horseradish instead of the super-spicy Japanese wasabi.) If there's a difference in taste, it's that the carrots add a pleasant fruity note. 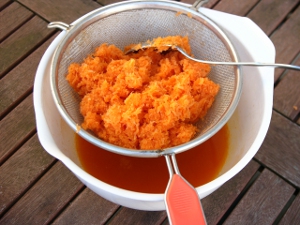 To prepare: Peel the carrots and grate as finely as possible, until they're in tiny pieces. I halve or quarter the carrots before putting them into the food processor. Put the carrot pieces into a pot and heat them in chicken broth. Set the heat on high, stirring constantly. When bubbles start to rise to the surface, remove from the heat, drain the broth (it makes a tasty soup), and let the carrot chips cool. It is essential that you don't cook the carrot chips too long or too short. If they're too raw, the intense raw-carrot taste will come through too strongly. But we don't want them to be mush, either; they should still have texture. When the carrots are lukewarm, sift in the gluten while stirring constantly. It should be evenly distributed so that solid clumps won't form. The gluten will make our rice substitute somewhat sticky, which is just right for our sushi.

When working with nori (paper-thin sheets of seaweed), you should use a sushi mat to make rolling your sushi easier. Don't use too little of the grated carrot. When filling the sushi rolls, don't limit yourself to the ingredients listed here. Try other kinds of fish and seafood, as well as vegetables like green asparagus, mushrooms, cucumber, squash, or whatever tastes good. The mat makes rolling very simple. Moisten the end of the nori sheet (the part not covered with carrot) so that the roll will hold together. I did this the first time and it was easier than I expected. Cut the roll into bite-sized pieces. Serve with soy sauce and wasabi.

My wife is not a fan of the seaweed, so she only ate the salmon rolls. When I'd had all I wanted, we took the rest to our neighborhood pub. The plate was empty in no time. The amazing thing is that no one who tried it could guess what the orange stuff in the rolls was. They had no idea that it was carrot!