At Easter we had company: a good friend who, like us, is a "foodie". Naturally, I had a lot of fun planning the menu. There was venison, salad, dumplings, homemade red cabbage. All low-carb, of course! As we were starting home from the farmers' market, loaded down with ingredients, I noticed a fruit stand selling the first raspberries of the year at a very reasonable price. I immediately thought of trying to make my mother's raspberry cream cake. My mother is a great cake and pie baker whose skill level I will probably never reach. But I have inherited her love of baking.

We'll start with the raspberries. After washing, heat them gently in a pot with 100 ml_(1/2 cup) water and 4 tbsp Sukrin. It's not really necessary to heat all the raspberries, but they spoil quickly and think that heating them briefly will reduce this risk somewhat. After boiling them briefly, remove 2/3 of the raspberries (the ones that are most intact) and drain them in a sieve. Return the cooked-down syrup of the berries to the pot and boil uncovered for 20 minutes. Sieve again and put half the raspberry syrup in a cup with 2 sheets of gelatin. (I use powdered gelatin, since it doesn't have to be cooked and works better in the cream layer of the cake.) This is the glaze for the cake. The other half of the syrup can be mixed with the flesh of the berries and cooked into jam. When the consistency is right, add a sheet of gelatin. 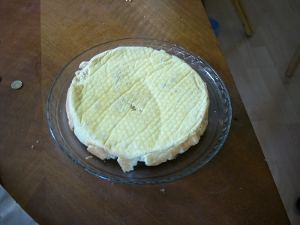 While the jam is cooking, we can move on to the first layer. We've modified our Jelly Roll recipe to make it lighter. That makes it less strong, but that's not a problem since there will be a hard crust on the bottom of the gateau. Separate 6 eggs and add 50 g_(2 oz) Sukrin to them (this will keep them stable after beating). Add 10 tbsp warm water and 1 tbsp lemon juice to the yolks. Then beat both the egg whites and the yolks. I used a food processor to beat the egg whites, and after about 15 minutes at low to medium speed they were perfectly creamy. The yolk was ready after being beaten with the mixer at high speed for 5 minutes. Then sift the almond flour and gluten and carefully stir them into the egg yolk mixture. I found that the foam didn't collapse at this point like it had with the jelly roll recipe (probably because of the additional egg and 2 extra EL of water). Next, fold in the egg whites. To bake, line the bottom of a Springform pan with parchment paper and then attach the band. The sides don't need parchment paper. If they stick, we can easily solve the problem with a sharp knife. 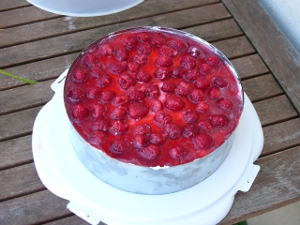 I previously used a sturdy crust when making the Double-Decker Blueberry Pie. Just knead the flour, butter, and water into a smooth dough and press it into the bottom of the previously buttered Springform pan. I made a little extra dough (double the amount here) and used it to make cookies. Both the base of the gateau and the cookies should be baked at 400° F (200° C) for about 20 minutes.

Before "assembling" the cake, all we need is the cream layer. Mix the cream cheese with 200 ml_(1 cup) cream. Then add the pith from inside the vanilla beans, the lemon juice, 3 sheets of gelatin, and the sweetener. Beat the remaining cream until stiff and fold in 2/3 of it. We'll reserve the rest for decoration.

From here, finishing the cake will go quickly. The jam goes on the bottom, followed by the sponge cake. Then we attached the Springform band and spread the cream layer inside it. Make sure it's good and smooth! When we made it, the cream was so firm that we were able to put the raspberries on top right away. If yours isn't firm enough, put it in the refrigerator for 30 minutes. Once you've added the berries, pour the glaze on top. The finished cake should be chilled in the refrigerator for at least 2 hours.

Once everything is nice and firm, run a warm knife around the inside of the Springform band and then remove it. Smooth whipped cream onto the sides of the cake with a spatula. The remaining cream can be used to decorate the cake. I need a lot of practice for this part. 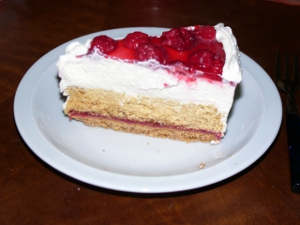 We surprised our friend with this cake. She hadn't heard very much about low-carb food and assumed that she'd be eating only meat and salad for two days. We were even able to convince her that our rich food won't make her gain weight (as long as she doesn't eat carbs in addition to it). Our cake has thousands of calories, but less than 4 g carbohydrates per slice! It was a delicious finish to our Easter menu.