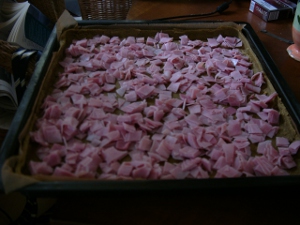 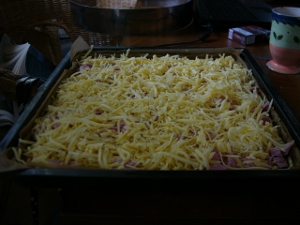 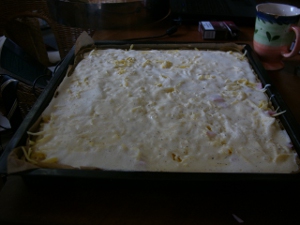 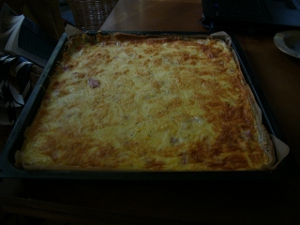 Fertig!
One of my favorite recipes from the old days was Quiche Lorraine. No birthday buffet should be without it. I always cut it into small servings, because it's very filling! Once I moved to Offenbach and my parties got significantly larger, this wonderful dish was forgotten. Nachdem ich nach Offenbach gezogen bin, und meine Parties wesentlich größer wurden geriet dieses wunderbare Gericht etwas in Vergessenheit. A large pot of Chili is better suited to the task of feeding 35 hungry guests. Nowadays we don't entertain at home as much, but we do get invited out, and I thought a quiche would be a nice contribution to a potluck dinner. A low-carb quiche, of course!

To make a crust for the quiche, we'll start by kneading the butter into the sifted almond flour and gluten. The butter should be taken out of the fridge for half an hour beforehand. Otherwise you'd have to be a bodybuilder to knead it! Adding 4 tbsp water will give you a nice pliable dough. Don't forget to add salt. Today we modified our usual shortcrust dough recipe by replacing 1/3 of the almond flour with pumpkin seed flour. (Warning: the pumpkin seed flour we bought was very salty. So be careful not to add too much extra salt!) This substitution gave the dough a fine nutty flavor. It also made the dough pale green, which is fitting to the season - it's almost Halloween!

Roll out the dough and lay it on a baking sheet. We lined the sheet with parchment paper first. We also formed the dough into a 1 cm-high border all the way around the edge. I always take a lot of trouble with the edge and trim it with a knife so that it's exactly the same height all the way around, since the edge is the part of the crust that's most visible on the finished quiche.

Cut the ham into cubes and then spread it evenly over the crust. For the cheese, a mixture of Edam and Gouda tastes best. We like to use a more flavorful aged Gouda. Grate the cheese and distribute it evenly over the crust. Then separate 6 eggs and beat the egg whites until stiff. Mix the yolk with the cream and season with salt, pepper, and chili powder. The amount of salt should be based on the flavor of the cooked ham and cheese. As the chef, you'll need to taste it. Luckily my wife was willing to help with this thankless task! After six attempts, I was able to get the amount of salt exactly right. The next step is to carefully fold in the beaten egg whites.

Spread the sauce evenly over the ham and cheese. Now the quiche is ready to go in the oven. Bake at 175 for 30 minutes, until the top begins to brown and the crust is fully cooked. This quiche is delicious whether you serve it hot or cold!