The best-tasting autumn dish is pan-fried mushrooms that you've gathered from the woods. 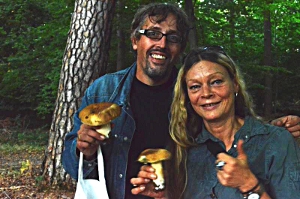 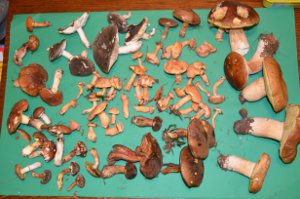 For your own safety, make sure you can identify your mushrooms first! Or else bring a friend who knows them. You can learn a lot from them and it's more fun, not to mention tasty and very low-carb. Mushrooms contain almost no carbs and are very satisfying!

First, of course, you need to have good luck finding them!

Last Saturday we did have good luck, and our mushroom hunt had impressive results: five big, beautiful porcini, along with bay boletes, slippery Jacks, Jersey cow mushrooms, red-cracked boletes, charcoal burners, and several others. Of course, we followed the rule of only picking what our "boss" could positively identify. We left everything else alone. The most common dangerous mushroom was death cap, which grew in bunches.

Cooking them was also a lot of fun. Since we had almost 2 kg_(4 pound) of mushrooms altogether, we decided not to make side dishes. After cleaning them, which we've learned is an art in itself, the mushrooms went into the pan. We'd already browned two finely sliced cloves of garlic in clarified butter and then removed them from the pan (the garlic flavor remains in the butter). First we cooked the firmer mushrooms, and then we put in the softer ones. Finally we added cream, vegetable broth, salt, and pepper. With a glass of white wine, they were a perfect ending to a wonderful day!