The quickest, easiest, and most beloved party food is chili con carne. But that means red beans and corn, which are loaded with carbs. 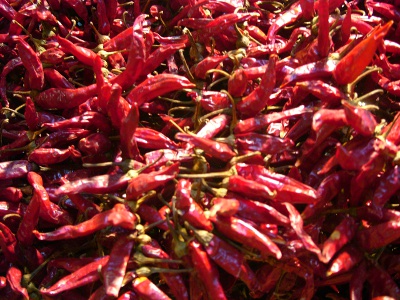 Our "no-beans" chili will amaze you!

I'd been wondering for days how to make my tried-and-true chili recipe without beans and still preserve the taste. Then came the epiphany: instead of beans, corn, or potatoes, just use peppers and mango. Other than that, almost everything stays the same. My wife was skeptical, but she agreed to let me give it a test run.

In practice, it was a little more complicated - but you'll see for yourself. The challenge is that beans can cook almost indefinitely without disintegrating. You can easily prepare the chili a day early and reheat it 10 times as needed - and it's better every time. Pepper and mango, on the other hand, will dissolve if cooked for too long. They shouldn't be added to the pot too early if they're going to keep their texture. (They will hold up well if you reheat them gently, though.)

But this is the only downside. Even the first low-carb attempt tasted at least as good as the original recipe. And this version won't give you gas!

In a large saucepan, brown 2 pressed cloves of garlic in olive oil over high heat. Then add 900 g_(2 Pound) ground beef (preferably bought fresh from a good butcher, not from the supermarket). Add a chopped onion and continue to sautee the mixture. Good ground beef won't absorb too much of the liquid. Deglaze with 1 cup beef broth and then add 1 liter (5 cup) tomato puree. (Buying fresh isn't worth it. Canned tomatoes are best for soups and stews because they were harvested when fully ripe and had more sun.) Season to taste with salt, pepper, and chili. I've also used Arabian curry. If it's not available, coriander will also work.

Simmer everything over a low flame. Meanwhile, prepare the mango and peppers. Depending on their size, use 1-2 fully ripe mangoes and 2-3 peppers. Peel the mangoes, remove the pits, and then cut the fruit into dice-sized chunks. Core the peppers and cut them to the same size.

Is that it? We don't have to do anything else?

Wait! Don't add the mangoes and peppers yet!

Divide the chopped mangoes and peppers into 2 equal parts. Add the first half when the party officially starts and the second half when the first guest arrives. That way, some will be overcooked and the rest will be crisp. If the mango is too acidic, you can add a little sweetener. Now is the time for the final seasoning with salt and chili.