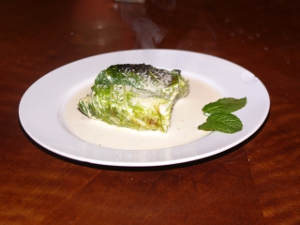 We recently saw a food stand advertising fresh pelmeni, and it reminded me of my Russian friend Joreg. I once visited him when he and his family were making pelmeni. Their version was from southern Siberia and requires a lot of work. For one thing, it uses seven kinds of meat: beef, pork, rabbit, chicken, goat, mutton, and even bear. Obviously this is a large-scale production. When Joreg made pelmeni, all his extended family and friends came over for a feast - about 50 people. In the Caucasus pelmeni also includes a strong cheese and eastern herbs that give it a special flavor. In the original, this filling is wrapped in a simple dough and then cooked in broth. The finished Pelmeni are eaten with a dollop of sour cream. For our low-carb version, of course, we let the bears live and limited the meat to ground beef. Instead of dough we used blanched Savoy cabbage leaves. Then we baked the cabbage pelmeni in a mixture of broth and cream, which almost completely took away the "cabbage-y" taste and created a flavor very similar to that of Russian pelmeni. This dish makes an excellent appetizer or party food, but it works equally well as a main course.

Take six large leaves from a head of Savoy cabbage. Avoid the dark green outer leaves; use the tender light green leaves instead. Remove the hard stalk from the center of each leaf so that you're left with two leaf halves. Blanch the halves in hot water for 10 minutes.

Slice the brined cheese (we always use Turkish, which is available in most ethnic grocery stores here) into small cubes. Chop cilantro and mint leaves. Combine both with an egg and the ground beef and knead together. Season strongly with salt, pepper, and chili.

Form the seasoned meat into thumb-sized rolls and wrap each one in a cabbage leaf. Place the pelmeni in an oven-safe dish and pour a mixture of cream and granulated bouillon over them. (Warm the cream slightly if the bouillon isn't dissolving in it.) The pelmeni should be at least half covered with the cream sauce. 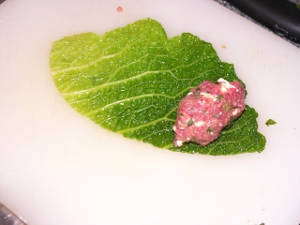 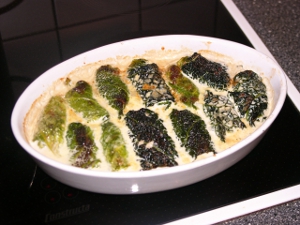 Bake at 400° F (200° C) for 30 minutes. You should periodically pour more of the sauce over the pelmeni so that they don't dry out while baking.

The pelmeni are finished when the meat is fully cooked and the surface of the cabbage is crispy but not black. Even without the bear meat, these are an unusual and exotic treat!