Since I started writing the blog I've found myself talking about food more often, whether it's with friends or with the lady tending the bar. Unfortunately, my wife isn't so enthusiastic. 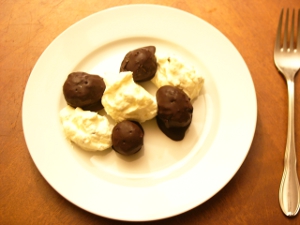 It gets on her nerves, especially when she's hungry: "If you keep talking about food, you'll have to go home and cook me something!" The reason guys talk about cooking has to do with machismo. We want to prove that we're the best or most creative cooks. Although I mentioned the lady at the bar, men seem to get more competitive. So when I recently told a friend about my caramelized chicory, he had to one-up me by telling me about his amazing candied Brussels sprouts. (Yes, this really is the kind of thing we talk about at the bar.) This gave me a crazy idea, which I tried the next day. This new taste experience, along with the words "I thought it up all by myself", put me back on top. Men like to think they're macho and I'm no exception. (My wife is laughing at me for some reason.)

But enough talk - let's move on to the recipe. It's as unusual as it is easy, and we've added it to our Christmas menu as an appetizer.

Boil the Brussels sprouts (I chose extra-small ones) in salted water for 8 minutes and then chill. In the meantime, make the chocolate glaze. For this, dissolve the butter and coconut oil in a pot of water. Then stir in the cocoa and powdered cream. For our chocolate glaze we used some chili but almost no sweetener. Stick a fork into each of the cold Brussels sprouts and dip them into the chocolate. After taking them out a few times to rotate the fork, put them on a cookie sheet lined with parchment paper. By now you may have noticed that there's way too much chocolate glaze. It doesn't take much to coat 20 Brussels sprouts, but you need enough so that you can dip them. I don't think this is a problem, though. If you add some sweetener or nuts to the rest and let it cool, you'll have wonderful chocolate to eat.

Let the coated sprouts cool until the chocolate is completely fixed. Now all we need is our "snow". Just beat the cream with a pinch of salt and 2 dsp sweetener until stiff. Crush 1 dsp green peppercorns in a mortar, add them to the cream, and serve.

Guaranteed to be a completely new taste experience, this combination of ingredients works very well together!