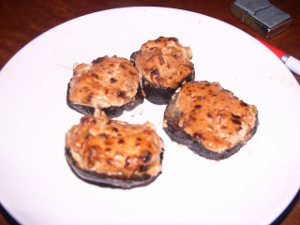 I recently met up with my sister-in-law. During our conversation, she told me that her doctor had advised her to eat fewer carbs. As you can imagine, that gave us more than enough to talk about for the rest of the afternoon! She'd eaten mainly vegetables and cheese during the summer and was happy to learn some good recipes for the winter. When she said that her favorite recipe was eggplant with cheese, my wife piped up: "We could try that, too!" That surprised me - whenever we have a mixed-vegetable dish, she carefully picks all the eggplant out of hers and puts it on my plate. Still a bit skeptical that this would be a success, I did some research and learned that you can reduce the bitter compounds in eggplant by blanching it in salt water. Better safe than sorry, I thought, so I tried it and found that the result is well worth the effort.

Soak the dried tomatoes in hot water with a dash of balsamic vinegar for at least 30 minutes.

After washing the eggplants, cut them into round slices about as thick as your finger. Fill a pot with plenty of salt water, bring it to a boil, and blanch the eggplant slices for 5 minutes max. Blot them dry and brown them on both sides in olive oil.

While browning the eggplant, we can remove the tomatoes from the vinegar water and puree them with an immersion blender. Add cream and cream cheese to the tomatoes. You probably don't need to add salt. The zing in our tapas comes from the chili peppers. If you don't like things to be too spicy, use mild peppers. We used medium-hot. The cream cheese mixture dulls the heat of the peppers, so feel free to be more adventurous than usual when selecting them. Cut the peppers into thin slices and mix them in.

When the eggplant slices are cool enough that they won't burn your fingers, spread them with the cream cheese mixture and bake at 175° C for 20 minutes. 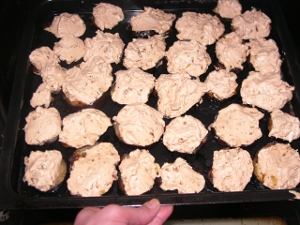 After dinner, my wife gave me a big kiss on the cheek and said, "When you make eggplant, it actually tastes great."