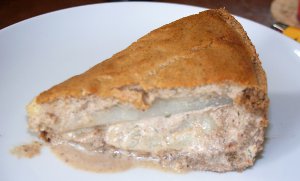 My wife and I love asparagus. When it's available in the springtime, we eat some almost every week. Of course, being a low-carb fan raises the question: how should we prepare it? Last year we prepared Jerusalem artichokes more often, but this year we've focused on asparagus - sometimes with a minute steak, always with homemade Hollandaise sauce, but even asparagus by itself is satisfying!

Last week we wanted a little more variety, so I came up with the idea of an asparagus tart. Unfortunately the first attempt was a failure, since asparagus produces a lot of juice while baking. When we took our tart out of the oven and cut into it, the filling ended up all over the table. The tart tasted good, but I couldn't recommend that recipe with a clear conscience. Today was the second attempt. Even with a modified recipe the dough was very moist, but the juice didn't leak out. To be safe, here's a tip: after baking the tart, don't remove the sides from the Springform until you've set it on a large plate.

Peel the asparagus thoroughly and boil it in a pot of water with 1 dsp salt and lemon juice. The asparagus is finished when it can be easily cut with a knife. While the asparagus is boiling, knead almond flour, gluten, 1/2 dsp salt, 6 tbsp water, and the butter (preferably removed from the fridge an hour earlier) into a smooth dough. 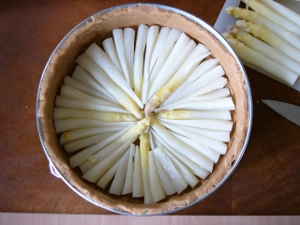 Roll out the dough and line a greased Springform pan with it. The sides of the pan should be greased to a height of 3-4 cm, ensuring that the surface of the dough will be dense. Then, when the asparagus is done, bake the crust at 175° C for 7 minutes. Pre-baking it will make it less soggy later. For the filling, separate the eggs and mix the yolks with the cream cheese and cream. Stir until smooth, then stir in the finely-chopped thyme and the almond flour. Season to taste with nutmeg and black pepper. Finally, beat the egg whites (not too stiff) and carefully fold them in.

Now it's time to assemble the tart. Cut the asparagus spears in half and arrange the bottom halves in the crust so that they lie from the center of the tart to the edge, forming wedges. The halves with the heads should be approximately the same length. Next, arrange these top halves on top of the bottom halves with the heads at the center of the tart. (If you use very thin asparagus stalks, only use 1/3 of them per layer so that you'll have 3 layers.) Once you've filled a layer with asparagus, spread some cream cheese filling on top. Then put down the next layer. Finally, spread the remaining cream cheese filling to form a smooth top surface. 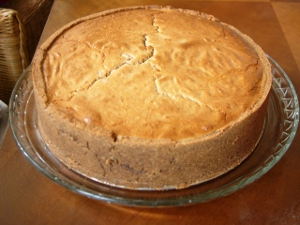 Now bake the tart at 175° C for 45 minutes. And please, don't forget my tip about putting it on a plate before cutting it. It wouldn't be a disaster if some of the filling leaked onto the table, but it tastes so good that it would be a shame to waste any.

To go with our asparagus tart, we've made a Hessian specialty that complements the taste well: Frankfurt Green Sauce. Where we live it's possible to buy a prepackaged mix of herbs for the sauce. If you live outside of the Hesse region, you'll need the following herbs: parsley, chives, chervil, cress, burnet, sorrel, borage, dill, tarragon, and lemon balm. The herbs should be removed from their stems and finely chopped. Put half in a blender with the curd cheese, cream, mayonnaise, and olive oil, and process very finely. (Chefs in restaurants save time by throwing the stems into the blender along with the leaves. It's faster but doesn't taste nearly as good.) Now mix in the other half of the herbs. The most delicious spring sauce ever is ready to eat!