After several attempts with baking powder, I've given it up altogether. The bread tastes like it came from a cheap baker and it doesn't rise correctly. In my opinion, bread only tastes right when it's made with yeast dough. Since yeast feeds exclusively on sugar, or rather on carbohydrates that are converted to sugar, it isn't possible to make yeast dough without flour. I give the yeast what it needs but anticipate that it will eat it all, so that afterwards, all that remains of the carbs is CO2 and water.

So here's my bread recipe:

While the fermentation is taking place, we'll mix the rest of the dough. For the simplest recipe, sift 12 oz (350 g) oil-free almond flour and 5 oz (150 g) gluten into a bowl. Add 1 dsp salt and the coriander. I recommend mixing the dry ingredients well, since the gluten can cause the salt and spice to become unevenly distributed. In addition, our bread always gets 2 tbsp (or more) of olive oil.

Then we'll mix the yeast, which is already working, and about 1-2 Cup (300 ml) of warm water. (The warm water makes the yeast "comfortable," before it realizes that it will starve from the lack of carbs in our dough.) The amount of water necessary can vary. Be ready to add more if needed. With kneading you should get a compact dough, not runny, that won't stick to the side of the bowl.

After kneading_(better longer than shorter), shape the bread. Let your imagination run wild in choosing the shape. That said, you may need to shorten the baking time if you use an exotic shape. We prefer the traditional loaf shape. The important thing about the shape is that the surface is nice and smooth, without any cracks. (We once found mold growing in a deep crack in a loaf after ten days, although it may have been because we'd stored the loaf in a plastic bag.) So if there are any cracks, smooth them out with your thumbs.

Next, put the loaf into the oven. We always place it on parchment paper on the central rack. Now the yeast gets an hour at 120° F (50° C) to do its work. 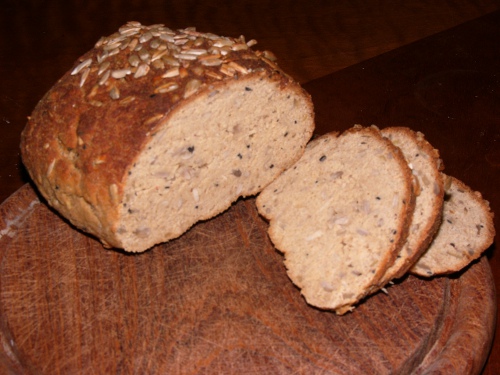 Then remove the cloth, which has kept the bread from drying out too quickly (don't forget this step!), and bake the bread at 440° F (225° C). For a round loaf, 60-75 minutes should be long enough. All breads taste best when fresh. This is also true of low-carb bread. Still, you should let the bread cool before slicing it. The great thing about low-carb bread is that it keeps well. Even after eight days, it still tastes good and won't be stale. You can let it sit out, or you can store it in a paper bag or breadbox. Don't store it in plastic!

Lots of people ask why we don't use a bread machine. That works, too! But, as with any bread, the crust won't be as good as when you bake it in the oven. Also, our machine had some problems mixing a 1-kg loaf. The almond flour is probably a little heavier than regular flour. Since the bread keeps for so long, we always bake two loaves, doubling everything in the recipe above and then dividing the dough in half. We'll eat them both within eight days, and it lets us do the same amount of work while saving energy. This is another point in favor of using the oven instead of a bread machine.