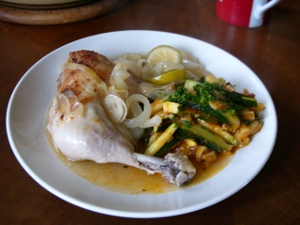 My hometown, Offenbach, is a leader in German multiculturalism. People from more than 100 countries live here, and every June there's a large street fair that celebrates our city's diversity - especially the culinary kind. The Offenbacher Mainuferfest is undoubtedly the nicest local festival in the Rhine-Main region. Unlike its counterpart in nearby Frankfurt, it isn't commercialized at all. Sports teams, musical groups, and artistic and cultural associations host our festival. The prices are reasonable and a lot of local bands perform. Local specialties from countries all over the world are served. I got the following wonderful recipe for lemon chicken from a Senegalese food stand.

Yassa is normally eaten with rice or plantains. For our low-carb version we made zucchini sticks, which go very well with the dish.

The preparations for this dish - which otherwise requires very little work - begin the day before. Mix the lemon juice with the olive oil and salt to make a marinade. Place the chicken thighs (you can also use other chicken parts) in a baking dish and pour the lemon marinade over them. Cut the onions into rings and the limes into slices, then place them on and around the chicken parts. Press everything down so that the marinade completely covers the meat. Then cover the dish and keep it in he refrigerator for 1 day.

When it's time to cook the yassa, put the covered dish with the marinated chicken in the oven at 400° F (200° C), checking it often. When the liquid starts to boil, let it bake for 15 more minutes. 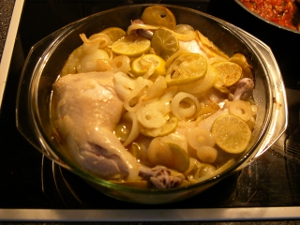 Then remove the baking dish and lay the chicken thighs on top of the onions and limes. Now set the oven to 430° F ( 220° C) and bake the chicken uncovered until a nice brown crust forms on top.

During the first cooking time you can prepare your zucchini sticks. Wash the zucchini and cut them into thin sticks, about 5 cm long. Peel the tomatoes (not necessary, but you can if you want) and cut them into small pieces. Chop the garlic and herbs (we used thyme, sage, basil, and marjoram, which we grow on our balcony). While the chicken is browning in the oven, prepare the tomato sauce. Add olive oil, garlic, and tomatoes to the pan. Reduce the tomato sauce to about half. Then add salt, pepper, and spices. Cook the zucchini sticks in the sauce at full heat for 4 minutes, and take them out while they're still crisp. DON'T cover them while they cook - they're not supposed to absorb water, because we want them to soak up the lemon sauce later. 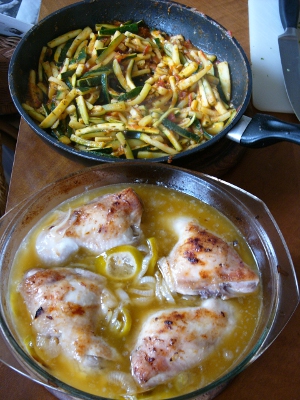 Now it's time to dress the food for the table. Arrange the chicken and zucchini sticks on a plate and spoon some sauce over them. The onions will also be delicious. You can eat the limes if you want, although they're probably too sour for most people. We had a lot of sauce left over, so we simmered the chicken bones in it for 3 hours to make the base for a really good lemon-chicken soup.

The chicken was the tastiest thing I've ever eaten. It was very tender and infused with a fine lemon flavor. We can always learn from other cultures, both in the kitchen and elsewhere!