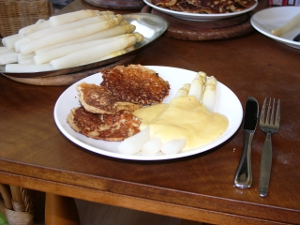 A friend recently asked why I hadn't put a recipe for asparagus with Hollandaise sauce on the site yet. I thought there were already enough good Hollandaise recipes out there, but a Google search said otherwise. It's not easy to find a recipe that tastes good and is fairly certain to work. This is partly because of all the low-fat versions out there. You can also buy Hollandaise at the grocery store instead of making your own, but that's out of the question: store-bought Hollandaise is more than five percent sugar. And homemade tastes much better!

Cooking was stressful today, because I made asparagus and Hollandaise to go with Schepp-Kreppel pancakes (a nice combination). I went back and forth between frying pancakes and making the Hollandaise, so it got pretty chaotic. Both require your full attention.

Nutmeg and/or chili to taste


I first gave the recipe for Schepp-Kreppel pancakes two weeks ago. Asparagus isn't difficult to cook, although if you eat a lot of it, I recommend buying an asparagus pot. This has the advantages of using less water (which won't leach all the flavor from the asparagus, and can be used to make soup later) and of keeping the asparagus tips above the water. This way you can cook the asparagus until it's nice and tender while keeping the tips firm. In a normal pot, asparagus usually gets overcooked!

Now to our Hollandaise. Combine 3 egg yolks and salt in a pot. (Later, the pot will be placed over a water bath.) Beat the eggs with a whisk until creamy. Meanwhile, melt the 1/2 pound butter over low heat. There are chefs who also clarify the butter by skimming off the foam that forms as it melts. The foam is almost pure protein and contains a lot of flavor (like butter), so I always leave it in my Hollandaise. Now slowly add the asparagus water to the egg yolk. Continue stirring until it forms a homogeneous mass. Then add the butter. I've read that you should add it drop by drop. Personally, I just make sure that the melted butter is not too hot and then add 1/3 or 1/4 of it at a time, and so far I've never had it clot. That said, it's important to stir well after each addition. Now the Hollandaise is almost finished, except that it's much too runny. Place the pot in the water bath and heat it. It's very important to keep stirring continuously (which is difficult when you have pancakes going on the stove at the same time, like I did). When you notice the sauce beginning to stiffen (the wires of the whisk should leave little trails behind them) remove the pot from the water bath and stir for 10-30 seconds longer. The Hollandaise sauce now has the perfect consistency and will adhere well to the asparagus. 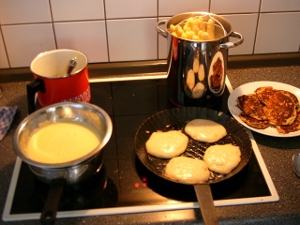 If the sauce fails (which happens even to professional chefs sometimes) and the egg and fat separate again, there's a simple trick: pour the sauce into another pan and add an ice cube to the pot in the water bath. Still stirring, use a tablespoon to add the sauce to the pot with the ice cube and reheat it. Almost miraculously, the sauce will come together again!

Next week we're going diving in Tenerife. We hope to bring back a lot of new cooking ideas. Regular readers of the site may have to wait a little longer for the next recipe.