The recipe I want to introduce today goes back to Adolf Schneider, a village butcher from the Westerwald mountains. 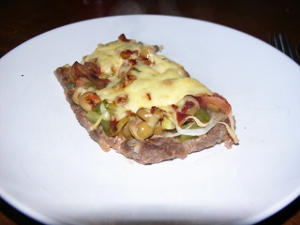 According to my aunt, he was a big influence on my life. When I was a baby my mom often took me shopping with her. Whenever Mr. Schneider the butcher waited on her, he would give her an extra little piece of beef. "Inge, that's for the little one, because he always has such a nice smile!"

I came into the world weighing eight pounds, and thanks to this happy childhood, I've remained a "bundle of joy" for 45 years. By going low-carb, I will hopefully be able to keep my size compatible with my zest for life.

But back to Schneider's Pizza. Italian food became popular in German during the early 70s, with everyone in town trying new dishes. The homemade pizzas were usually miles from the Italian original. None of that thin, crispy crust in Germany - the result looked more like crumb cake with red sauce and cheese. Then our local butcher had the idea of using ground beef instead of a hard crust. This was a complete success, and soon many people in town were copying it. This unusual ground beef pizza became a typical dinner on Saturday evenings after a long day of working in the garden. 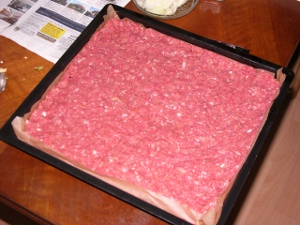 Some might say that it's too much meat, but it doesn't have to be that way. For one thing, our dough uses a lot of almond flour and can be rolled out quite thin. For another, Schneider's Pizza doesn't have the problem of being too thick the way regular pizza does. Even with a lot of tomato sauce and toppings, the base will remain firm while baking and taste wonderful.

For our "dough", knead the ground beef together with the eggs and almond flour. The consistency should be rather dry. You'll only need to season it with salt and pepper, since the Italian herbs are in the tomato sauce. The sauce consists of pureed tomatoes, the spices, and finely chopped onions and/or garlic to taste. It should be simmered for 1-2 hours while we make the dough. 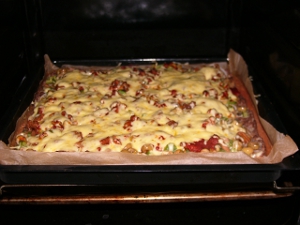 Cover a large cookie sheet with parchment paper and spread the ground beef "crust" on it, thinly and evenly. Then spread it evenly with the tomato sauce. With your other toppings, the sky is the limit. We used onions, capers, peppers, olives, and mushrooms. Some other possibilities are salami, bacon, tuna fish, and anchovies, but it's equally tasty with just vegetables. Use whatever cheese you like. Purists will insist on mozzarella, but I find it a little too tasteless. Schneider the butcher used a mixture of Edam and Gouda, which has more flavor. Back at 350° F ( 180° C) for 30 minutes.