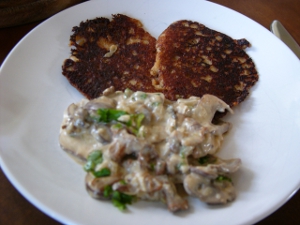 You're probably wondering what this funny-sounding name means. In Germany, "Kreppel" is a nickname for people from Berlin. People from the Hesse region (where these pancakes are a specialty) claim that the "Kreppel" can't get the recipe right, so all they can manage is a "schepp" (phony) version.

Another explanation is that "schepp" comes from the word for "to ladle". Scheppkreppel are yeast pancakes that you form by ladling batter into the pan!

I decided to try a low-carb version of this dish because, as we learned from our experiences with bread and stollen, we can create low-carb dishes with yeast. A yeast pancake has a unique and delicious flavor. And yeast is especially important for low-carb fans since it's one of the few sources of folic acid, a vital nutrient. We've come up with a savory version of our yeast pancakes (as a side dish to go with Pan-Fried Mushrooms) as well as a sweet version.

For the sweet version only:

As with the bread, we'll start by mixing 30 g wheat flour, the yeast, and 100 ml_(1/2 cup) warm water. (Don't worry about the wheat flour. It's food for the yeast, which will consume almost all of the carbohydrates.) Stir the batter until smooth and then place it in the oven at 120° F ( 50° C) for 30 minutes. Leave the oven on after removing the batter. You'll need it to keep the batter warm so that your yeast continues to work.

In the meantime, mix the almond flour, soy flour, and gluten with the salt. Then add 500 ml_(1 pint) soy milk, the cream, and the melted butter. Beat this part of the batter with a whisk until smooth. 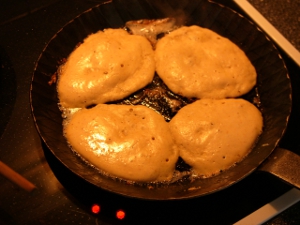 Once the yeast mixture has risen enough (it should be at least 3 times its original volume), gently fold it into the rest of the batter. Grease your skillet well with butter; it's time to fry the pancakes. Drop 4 tbsp of batter into the pan, as far apart as possible. The batter will spread to the right width and thickness on its own. If all goes well, you'll be able to see how the pancakes rise and become fluffy. When one side is finished, the pancake should loosen itself from the skillet so that you can turn it. If 2 pancakes run together, though, you should separate them before turning them and save yourself a headache.

For the sweet version: Before mixing the batter, heat the Sukrin and water in a saucepan until all the Sukrin dissolves. Remove from heat and add the dried blueberries. Let cool to room temperature, stirring often to keep the sugar from forming a crust on top. Stir this sweet mixture into the batter before frying. The interesting thing is that the blueberries combined with the Sukrin taste almost like raisins. If you want it extra sweet, add more sweetener (1-5 TL, to taste).

TIP: Never add anything too cold or too hot to the dough. It could cause the yeast to stop working_(too cold) or kill it (too hot).