Last week we gave a lot of thought to what we would cook on the weekend. Now that autumn is here, there is a huge selection of cabbages and other vegetables. My wife wanted Brussels sprouts, and I was thinking about how to use them in a low-carb dish. My inspiration came from listening to a soccer game on the radio. Our team won (yay!) and then the announcer quoted the great Sepp Herberger's explanation of how soccer works: "The round thing_(ball) has to go into the square thing_(goal)!" And that's when I got the idea for our Brussels sprouts dish:

Put round things (meatballs and Brussels sprouts) into a square casserole!

Pepper, olive oil for the pan

A chef once told me the secret of a good Brussels sprouts dish: buying the right ones. Don't just make sure the sprouts are fresh; select each one individually. The trick is to choose sprouts that are all the same size. The peculiarity of Brussels sprouts is that if they don't cook long enough, they'll be too hard, but if they cook too long, they taste bitter. So if your sprouts are different sizes, the recipe won't work as well. Either the large ones will be too hard or the small ones will be bitter.

To prepare the Brussels sprouts for cooking, remove loose or dead leaves and cut the stem slightly (if necessary). Then blanch them for 8 minutes (if small) or 12 minutes (if large) in lightly salted boiling water. 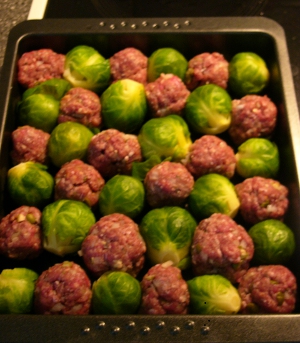 For the meatballs, chop the onion and capers very finely. Press the garlic and add it. Then add the ground beef, egg, and gluten to bind everything together. Season with 1/2 dsp salt and pepper and chili to taste. Once you've kneaded all the ingredients together, form the mixture into balls the same size as the Brussels sprouts and lay them out in a suitable form (we used a small cookie sheet) so that they alternate like squares on a chessboard. It's a feast for the eyes as well as the stomach.

Finally, it's time to prepare the sauce. Fry 2 coarsely chopped onions in olive oil until they're transparent, then deglaze with 2 cups strong broth. Then mix in the almond flour and guar gum. If this is your first time using guar gum: I don't know of anything that binds so strongly. Use a maximum of 1/2 TL. Sprinkle it in carefully and stir well, because it clumps easily. When the mixture forms a smooth paste, remove the pan from the heat and add the cream. Then beat 3 eggs until fluffy and fold into the paste. These should only be warm to the touch, or else the egg will immediately congeal.

Pour the sauce over your meatballs and sprouts and bake the casserole at 350° F ( 180° C) for 30 minutes. Near the end of the baking time, sprinkle the Parmesan over the top. Alternatively, you can stir it into the sauce. 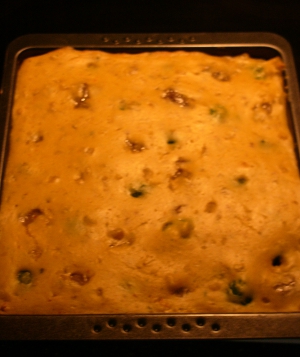 The casserole looks unusual and is really delicious. It will make vegetables appealing to soccer fans of all ages.