The story of the "Fake Swabians" begins with a disaster. Our friend Birgit - a native of the Swabian region of southwestern Germany - was coming to visit and we hoped to serve her our first low-carb spaetzle, a type of egg noodles that are a Swabian specialty. I'm cautious and like to be prepared, so I decided to test the recipe a week before she came. I also needed to practice scraping spaetzle (traditionally, they're formed by scraping dough off a wooden cutting board). So I began our first - and as it turned out, last - attempt at low-carb spaetzle. The consistency of the dough was perfect, so with a proud heart and a brand new cutting board, I got to work. The scraping went wonderfully. I put them on to boil, but then - trouble! - they didn't float back to the surface like they were supposed to. I waited for five minutes and then tried to rescue them with a slotted spoon. The beautiful spaetzle had disintegrated! Thank goodness I hadn't used very much dough, because my wife was hungry. So I decided to make a virtue of necessity and fried the dough instead. It ended up being delicious. 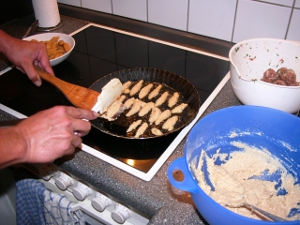 So far I haven't dared to try the spaetle again, but I have refined my attempts to turn spaetzle dough into a tasty new dish. We named the result "Fake Swabians," in honor of Birgit and because the taste is very close to spaetzle. Like many low-carb dishes, our Fake Swabians are rich in protein, making them very filling. So don't worry if the portion size looks a little small.

Fake Swabians as a side dish for 4:

Oil and butter for frying
To make dough for "Fake Swabians", mix almond flour, soy flour, gluten, 1 egg, and some fresh nutmeg, then add most of the water and stir immediately. That way no lumps will form. Then add more water until a smooth paste forms. I decided to keep using the old spaetle-forming method of scraping, except that instead of dropping the spaetle into boiling water, I saute them lightly in good butter. When frying, don't make the pan too hot (set the burner to medium heat at most). Brown the Fake Swabians on all sides for about 2 minutes. I think they taste best when they're not quite browned. To make enough for 4 people you'll fill the pan 4-5 times, so all in all it takes no more than 20 minutes of work. That's about the same amount of time that spaetzle take. The Fake Swabians absorb almost no fat, so you won't need to add more butter to the pan while frying.

We made stuffed peppers to go with the Fake Swabians. For the filling we borrowed a Turkish recipe that uses ground beef and lots of parsley. First, carefully cut 2-3 cm around the stem of each pepper, remove the insides, and rinse them thoroughly inside and out. For the filling, finely chop the parsley, onion, and fresh spices. Press the garlic and then knead everything together. Then fill the peppers with the mixture and put the "lid" (which you hopefully didn't throw away) back on. 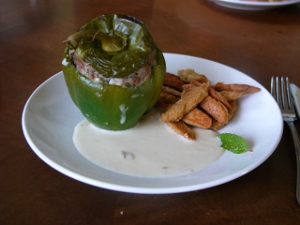 Put the stuffed peppers into a baking dish and bake them at 430° F ( 220° C) for 20 minutes. The peppers should become slightly blackened. This won't hurt the ground beef, since it's protected by the peppers' "lids". Then we add the mixture of white wine, bouillon cube, garlic, and onion and let the peppers cook with their lids on for 30 more minutes. The heat can be reduced to 350° F ( 180° C).

Remove the peppers from the baking dish. Refine the sauce with cream, and use guar gum to thicken it a little.