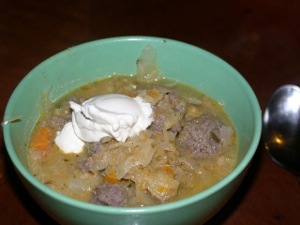 A while back I saw a news story about an eccentric Scottish earl. He lived in a castle and wore a kilt. Despite the stereotype of Scottish thriftiness, he had one special luxury: he'd hired a famous chef to be his personal cook! The story then revealed a secret about his kitchen: on an old wood stove, there stood a 50-liter pot that was always full of simmering beef bones. The resulting stock was the basis of most of his meals.

For our cabbage stew, it's worth the trouble to leave the bouillon cubes at the supermarket and make your own beef stock from scratch. White cabbage will absorb the flavor nicely. The homemade beef stock is what makes our stew special, and it really doesn't take much extra effort.

Pepper, some chili, thyme, Arab cumin, oil, garlic if desired
Chop the carrots, leeks, parsley, and celery root into small pieces. Put them and the soup bones in a pot with 2 liters of water. Add 2 TL salt and let the broth simmer over low heat for at least 3 hours.

Next, pour the stock through a sieve. The bones can be thrown away and the vegetables should be pureed. The cabbage can be sliced into thin strips and added to the clear broth. Season with thyme and cumin. I used Arab cumin, which in my opinion has a finer flavor and goes well with cabbage (it's also an antiflatulent). After cooking for 30 minutes, the cabbage will be soft. We'll use this time to knead the ground beef with the eggs, finely-chopped onions, almond flour, and 1/2 TL salt (and 2 garlic cloves if you want) and form it into little balls.

Cooking the balls in the stew is a little tricky. Move some of the cabbage to the sides of the pot so that there's a little "pond" of broth in the middle. Put 3-4 meatballs in the "pond" and push the cabbage back over them. This way the meatballs will cook from all sides without falling apart. Repeat with the rest of the meatballs. When all the meat is in the pot, we'll thicken the stew by adding the pureed vegetables. Season with salt and pepper, and you've got a great low-carb winter meal. If you're not on a strict low-carb diet, you'll appreciate that the stew is low in fat. Experienced low-carb fans won't necessarily like this, so they can add 3-4 EL oil if they like. The herbs will absorb it, adding to the flavor. Serve with a dollop of sour cream.