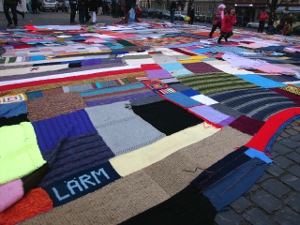 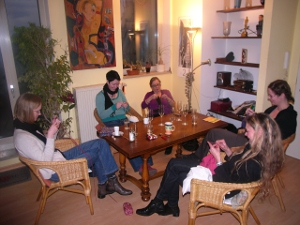 My city, Offenbach, has been suffering from the expansion of the Frankfurt Airport. Everywhere else in the world, airports are built where they will affect the fewest people, but our Hessian government approved a runway about 500 meters closer to the densely-populated area of the city. Since October, the pilots have been thundering over downtown Offenbach - right over my head! Fortunately, the citizens are working together to protest the government's disregard for their interests and health. One form of protest is to knit a "noise blanket". On Sunday, March 4, several hundred knitters gathered on the Wilhelmsplatz in Offenbach. It was a great community action, and the blanket ended up covering more than 400 square meters. The week before, my wife had invited some of her coworkers to our house for a knitting circle in preparation. I was responsible for the food, and naturally it was low-carb: a colorful and vegetarian "committee casserole".

We'll begin with the crust. Sift the different flours into a bowl, then add salt, spices, and the room-temperature butter (cut into flakes). Knead the dough and gradually add the water until the dough is smooth. Roll it out and put it in a cake pan that you've pre-greased with butter or olive oil. The dough should cover everything tightly, and the edges should be about 3 cm high. 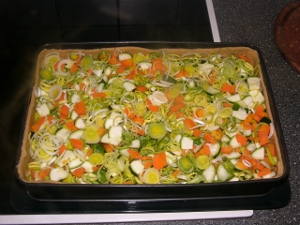 For the sauce, use a mixer to beat the eggs at high speed until frothy; they will triple in volume. The froth should not be too stiff. Then fold in cream, approx. 100 ml_(1/2 cup) of the cooled vegetable cooking water, salt, 2/3 of the Parmesan, and the spices. Spread sauce evenly over the casserole. If not all the vegetables are covered, press on the surface with a wooden spoon until everything is well moistened. Bake the casserole at 175° C for 1 hour. After 45 minutes, sprinkle the remaining Parmesan over it. If the sauce still hasn't set, you can briefly open the oven door 2-3 times during the last 15 minutes of baking to release some of the moisture. 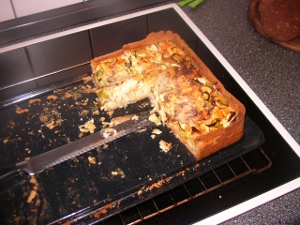 Our knitting group liked the casserole so much that, when I went to photograph it, I only found a few remnants. So if you're providing dinner for a committee meeting, this vegetable casserole can help them accomplish great things!