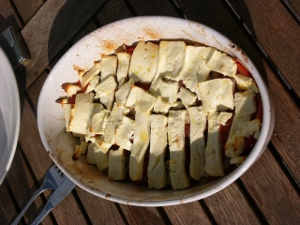 When the woman who would be my wife came to visit me for the first time, I made a recipe that I'd gotten from a Greek friend: bujurdi. Not many people know it by that name; it's usually just called "baked tomatoes". Despite its simplicity, bujurdi has a bold and surprising flavor. It was originally meant to be a starter but can make a satisfying main course - especially if it's a hot summer evening, or if you're newly in love. 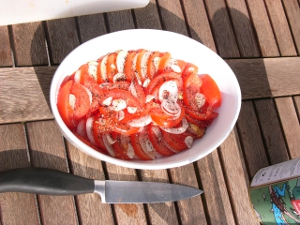 Slice tomatoes, garlic, and onion as finely as possible. (Cut the onion in half first, then slice it so thinly that there are as many onion slices as tomato slices.) Lay the slices in an oven-safe baking dish, alternating an onion slice with a tomato slice and sticking in a bit of garlic here and there. Season well with salt and pepper. Then lay slices of sheep cheese over the top. The higher the fat content of the cheese, the better it will melt. (55% is a good amount, and a high fat content isn't a problem for a low-carb fan.)

Finally, drizzle the olive oil over the top and bake at 350° F (180° C) for 30 minutes, or until the cheese melts and begins to brown. It pairs wonderfully with a Mediterranean bread, and like I said, it's quite filling.

My wife likes to tell the story of that evening, the meal, and how I captured her heart. You know the saying: the way to someone's heart is through their stomach!