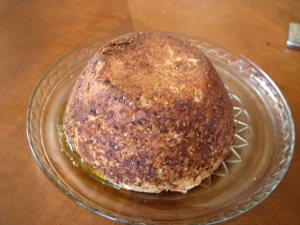 A few years ago I traveled to Nottingham and the English Midlands on business. Naturally I wanted to experience traditional English cuisine, but it wasn't easy - almost all the restaurants were serving Indian or Italian food, or at least English versions of them. I finally found an old inn called the Royal Children, and ordered the most exotic-sounding item on the menu: "Lamb pudding!"

In the Midlands, the word "pudding" is used for a variety of dishes. It always describes foods with a consistency somewhere between bread and porridge. People in other parts of England use the word "pie" to mean the same thing. Pudding does not just mean a sweet dessert made with boiled milk; it can be made with a variety of ingredients and techniques. My pudding was filled with lamb in mint sauce and tasted wonderful. The outside was covered with breadcrumbs and the pudding itself - as the cook told me - was made from a mixture of potatoes and cornmeal. I wanted to try recreating it, but never got around to it. I've finally come up with a low-carb version - almost traditional!

Pudding Butter to grease the pan

The biggest problem by far was finding a real pudding mold here in Germany. The basic requirement is for the mold to be as deep as it is wide. Most of the molds available here were designed for bundt cakes and have a hold in the middle - totally unsuitable for a filled English pudding! After looking everywhere, we finally found them on Amazon. So we invested 20€ and got three pudding molds of varying sizes, which can of course be used for other recipes. For our recipe we used a 1.5-liter pudding pot.

First, you'll need some old stale bread. We used leftover low-carb bread and crushed it very finely with a mortar and pestle. Grease the pudding mold with butter and cover the inside with bread crumbs (if you've buttered it thoroughly, the crumbs should stick really well). Peel the celery, cut it into pieces, and boil it with the horseradish and salt for 20 minutes until soft. Drain well, then mash it with the cream. Add salt to taste and then knead in the almond flour and gluten. 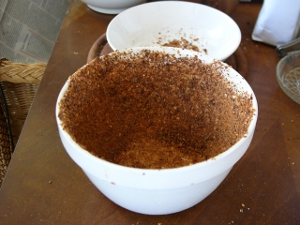 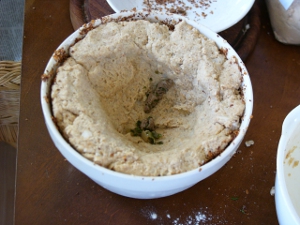 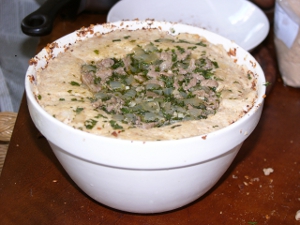 While the celery is boiling, shred the lamb finely (we used leg of lamb). Saute it in olive oil, then season with salt and pepper. Then add onion and garlic. When the onions are translucent, deglaze with the vinegar and Worcester sauce and simmer covered for 15 minutes, stirring occasionally. Finally, add the finely-chopped mint and cook for 1 more minute.

Carefully add the celery mixture to the pudding mold so that there's a hollow in the center. The layer should be approximately the same thickness at the base and sides. Fill the hollow with the lamb and mint sauce. Press down. If there's not enough mint sauce to cover all the meat, add a little olive oil. Then bake at 300° F ( 150° C) for 30 minutes. Before removing it from the oven, check to see if the pudding is nice and firm (the correct consistency for pudding is between bread and porridge). After removing it from the oven, turn the mold upside down on a plate and remove the pudding. It should be served with vegetables. Green beans or spinach are good choices.

My wife thought that it had a unique flavor, like nothing she'd ever tasted before. In my opinion, English cooking is much better than its reputation.

Robin Hood would have been thrilled!