My best low-carb recipes are based on experience dealing with different foods, observing their characteristics and how they behave. One such observation was the basis for the paella recipe I'm going to share. For New Year's Eve we made a large "potato" salad with turnips.

I cut the turnips into thin slices, cooked them, and then drained the water and let them sit in the pot for a while. An hour later I poured the dressing onto the salad. While mixing, I noticed that the turnips immediately absorbed all the liquid - and I'd made a lot of dressing. This gave me the idea to replace the rice in paella with turnips. And it worked very well.

First, peel the turnips and cut them into pieces, then use a coarse grater to process them into escalopes. The result is about 2-3 times the size of actual grains of rice. Then cook the grated turnips in a cup of chicken broth for 10 minutes. Cover the pot and stir often. 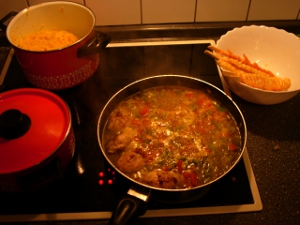 Using a strainer, separate the broth from the turnips (You can make an excellent soup with the broth, so don't throw it away.) Put the turnip pieces back into the pot and steam for half an hour. Then remove the cover and turn the stove down to low heat.

Now we can move on to the rest of the paella. First, sautee the scampi in olive oil in a large pan, then remove it. Season the chicken legs with salt and pepper and brown them well on all sides. Next, add the chopped onions and peppers. Once the onions are translucent, deglaze them with fish stock and white wine. Then add saffron, pressed garlic, and diced tomatoes. Cook at high heat until the liquid has been reduced by about half (20 minutes). Now you can add the fish and other seafood, as these only need 2 or 3 minutes to cook. Season with salt and pepper to taste. I remove the chicken meat from the bones now, but you can do it later on the plate if you want. Now add the grated turnips and stir well. The turnips will absorb all the sauce and take on the flavor of the paella, just like rice does in a normal paella. Of course the taste and texture aren't exactly the same, but it comes very close. 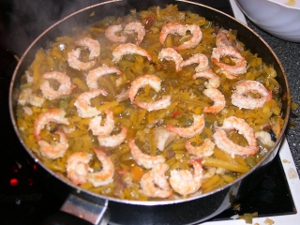 Cover the pan again for 30 seconds so that the scampi will be warm, and our delicious low-carb paella is ready to enjoy.