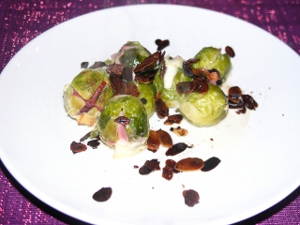 Some people only cook so that they can eat the result. Taste is important to most people, of course, but if you cook every day you may just want to get it over with quickly. But if - like me - you do most of your cooking on the weekends, the process of preparing and cooking the food is part of the appeal. Instead of being a means to an end, it's a fun hobby. Last weekend I had a lot of fun!

We already knew we were going to have Brussels sprouts, and I really wanted to prepare them with bacon. The idea of just throwing them together in a pan was too simple for my taste. After much thought (for me, planning is also part of the fun) I finally came up with the solution. It's labor-intensive, but manageable!

Bacon Blossoms as a main dish to serve 2

Wash Brussels sprouts and boil in salted water for about 15 minutes. Tip: when boiling vegetables, use as little water as possible so that the flavor won't leach out. Don't overcook the sprouts; they should still be firm and have "bite".

When shopping, we bought bacon sliced about 3 times as thick as usual. Cut the bacon into postage-stamp-sized pieces. Using a very sharp knife, cut inward from all four sides of each bacon piece (as if you were cutting them into quarters, except that the cuts should not quite meet in the middle). It works well to put your thumbs on the bacon and press down lightly. Be very careful with the knife - if you're clumsy, keep Band-Aids nearby. The photo shows what your bacon should look like when you're done cutting.

Now make 2 cuts into the top of each sprout, forming a cross. The cuts should go about 2/3 of the way through the sprout. Now comes the complicated part: fitting something square into something round! On the first attempt I thought, "This is never going to work." My fingers got in the way. But when you hold the bacon with 4 fingers (all except the thumb on one hand) and use your free thumb and other hand to spread the cut sprout, you can fit the bacon "crosses" into the sprouts quite easily. It's about as difficult as eating with chopsticks - the first time is awkward, but you get used to it! 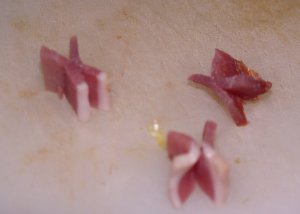 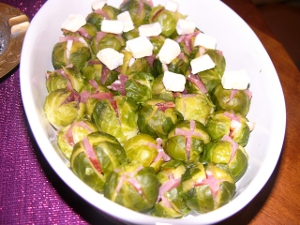 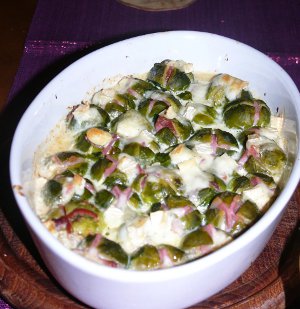 Arrange your bacon blossoms in the bottom of an oven-safe dish. Before the dish goes into the oven, place a small piece of Brie on top of each sprout, making sure to include some of the Brie's rind. Combine 100 ml of the Brussels sprout cooking water, 100 ml broth, and 100 ml cream and pour the mixture into the dish. This is not so much a sauce as a way to ensure that the sprouts don't dry out. Bake uncovered at 400° F (200° C) for 20 minutes.

When we tasted the finished dish, it exceeded all our expectations. The bacon flavored permeated the tender sprouts, and the rind of the Brie was crispy. The work - or rather, the fun - had really paid off. If you like, sprinkle them with a few almond slices browned in butter before serving. They also make a good side dish with our "Schepp-Kreppel" Pancakes.