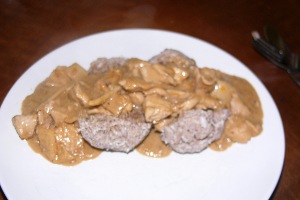 I admit it: there's actually nothing African about these dumplings. The coconut is from the Dominican Republic, the bamboo shoots from China, the orange from Spain, and the marzipan (a mixture of ground almonds and rosewater) from the city of Lubeck. And dumplings, of course, are about as German as it gets. Furthermore, they're seasoned with Christmas spices. In spite of all this, the dumplings reminded me of an African dish that I enjoyed once: the mild sweetness mixed with a colorful bouquet of exotic flavors, the slight spiciness contrasted with the tender buttery turkey breast. A truly extraordinary taste experience!

Anyway, my association was with Africa, hence the name. Why not?

I'll start with a few tips on the proper way to open a coconut. Before, I used "heavy equipment" and almost destroyed the whole apartment. It's actually very easy when you know how. If the coconut still contains coconut water, you should collect the water first. This works best with a corkscrew. The coconut has 3 small circular indentations on it; these are typically softer than the rest of the husk. Bore through them with the corkscrew and let the coconut water flow out of the resulting hole. Now take the heaviest knife you have (a good kitchen ladle will work, too). Using the blunt edge of the blade, strike the coconut lightly but persistently all the way around its circumference. After 4 or 5 times around, the nut should break into 2 halves on its own. No violence necessary, and the meat of the coconut is already loosened and can be easily detached with a few cuts.

Grate the coconut meat as finely as possible. Add gluten, ground hazelnuts, and almond flour. Add three eggs and mix to form a smooth dough. Add 1/2 TL salt. Form the dough into 8-10 dumplings. Fill a pot with water and add another TL salt to it. Bring the water to a boil, then turn the stove down to the lowest setting. When the water in the pot is no longer moving, add the dumplings. They should stay in the pot for 45 minutes. 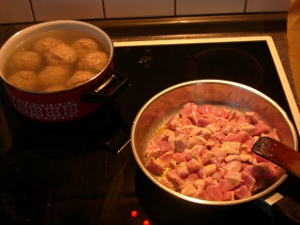 In the meantime we can move on to the gravy. Cut the turkey breast into dice-sized cubes and braise them in butter over low heat. This should take 10 minutes; if it goes faster, your pan is too hot. When they're done, salt the pieces of turkey on all sides and immediately remove them from the pan. Now it's time to kick things up a notch! Turn the stove to maximum heat and put the Sukrin in the pan. When it starts to bubble and turn dark, deglaze with the juice of the orange (we grated the top layer of the peel before pressing) and the chicken broth. Add the bamboo shoots and bring to a boil. Add ground almonds, rose water, and cream. The turkey can also be added, but as with the dumplings, be careful that the sauce doesn't boil it! Season with the orange zest, freshly-ground cinnamon, cardamom, and cloves (don't grind more than 3-5 cloves, or their taste will be too intrusive). If you saved the coconut water, you can add that too. Anyone who knows me knows that I tend to add chili to everything, and this recipe is no exception - a little chili powder will enhance the flavor even more!

Now the dumplings are ready and the African/Christmas feast can begin. Those with a sweet tooth will be especially happy! The combination of flavors is so outstanding that you won't want to limit this recipe to the Christmas season.