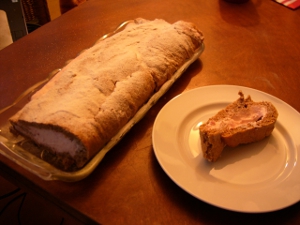 I ran into some unexpected difficulties while creating my jelly roll recipe. For the first time ever, I had to throw away food - my early attempts were that inedible. Now, on my fourth try, the cake part of the roll finally succeeded. I'm very excited about this strawberry roll! The "assembly" isn't perfect yet; since this is my first completed roll, I need more practice. If there are any seasoned bakers out there, feel free to share your tips.

The main difficulty we had with the cake was achieving a fluffy texture. We experimented with baking soda but the results were unsatisfactory. In fact, the cake tasted so bitter that we had to throw it away. It turns out that a leavening agent isn't necessary, though: the beaten egg whites introduce enough air into the batter. But the problem is that once you add the gluten, the batter can easily collapse. That's what happened on our second attempt. Finally, we found a combination that works. 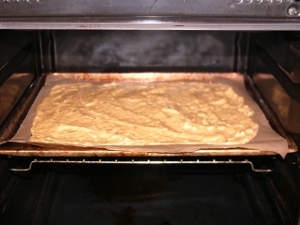 First, separate the egg whites from the yolks. Add half of the Sukrin to each. Don't use sweetener instead - the Sukrin is needed to stabilize the egg whites. When you're beating the egg whites, set the mixer between low and medium speeds. After about 15 minutes they will have reached the perfect frothy consistency. Combine the warm water and lemon juice with the egg yolk. You can turn up the mixer to full throttle when beating the yolks. Then carefully fold in the sifted almond flour and the gluten. This will make the foam of the beaten egg yolks collapse a bit, but it doesn't matter. Wait for all the gluten to be absorbed (approx. 10 minutes) and then fold in the beaten egg whites. These should still be nice and fluffy.

Now put the batter on a parchment-lined cookie sheet, spread it evenly, and bake at 400° F (200° C) for 15 minutes. Before taking it out, check to see whether the cake is fixed by poking it with a toothpick. The surface absolutely should not be hard. Then remove it from the oven and set it on a dishtowel. Roll up the cake along with the parchment paper, so that it will be in the right shape as it cools, and remove it from the hot cookie sheet.

To make the filling, just stir the ingredients together and use the gelatin according to the instructions on the package. We used premade gelatin, which is practical because you don't have to heat it. We coarsely chopped the strawberries with a hand blender. The cream should be beaten until stiff before it's added. The finished filling should be refrigerated for 15-20 minutes so that it's not too runny. (I got impatient and didn't chill it long enough, which made the finished roll look kind of messy.) 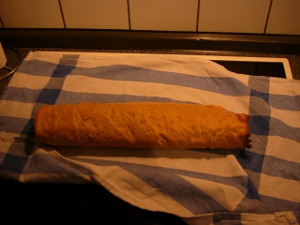 Now set the cake layer on a longish cake plate, carefully unroll it, spread it with the filling, and roll it up again. After 2 hours in the refrigerator, the low-carb jelly roll will be finished. Grind some Sukrin in a mortar and sprinkle it on top like powdered sugar. A wonderful snack with coffee!