Baumkuchen, or "tree cake," is a classic German dessert. It's easy to make but infamous for its calories. Since we're not worried about calories as long as there are no carbs, we can snack on it with enthusiasm and pleasure. We used almond flour for the batter and decorated the cake with almond brittle, so we've named our version "almond tree cake".

Because you can't buy low-carb brittle and because this needs plenty of time to cool, we'll start with the brittle. First, melt the butter in the pan. Then add the chopped almonds and cook over medium heat. When the almonds begin to darken, add 3 tbsp Sukrin. Keep over medium heat until the almonds are roasted to a medium brown. Then pour the pan's contents into a bowl. Don't add the melted butter yet - it will go into the chocolate mixture later, but only when it's cool. At this point, it would be wise to wipe your pan with a dishcloth or paper towel. Once the pan has cooled, it will be a lot harder to wash.

After this preliminary work, we can move on to the cake itself. First of all, you should decide what shape you want your cake to have. It can be round, pyramid-shaped, or simply rectangular (which is easiest). For the round shape divide the dough (made by kneading together almond flour, gluten, and grated almonds) into 4 equal parts and press them one at a time into the bottom of a round Springform. For a rectangular cake, roll out the dough, lay a sheet of paper on top of it, and cut off everything that sticks out from the edges of the paper. If you want a pyramid, roll out 4-8 different-sized pieces of dough. Make sure that the dough is a uniform 3-5 mm thick.

We don't recommend letting this dough sit before you roll it out and shape your cake. On the contrary: I found that it became more difficult to roll and shape, since it gets crumbly with time. 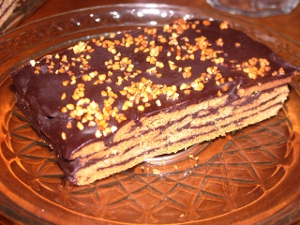 In the meantime, we'll combine butter and palm butter in a pot and dissolve them over a water bath. Stir in cocoa powder and powdered milk, then sweeten to taste with rum flavoring and liquid sweetener. Don't worry about lumps! Just pour them in and stir for 5 minutes. Then everything will be smooth.

Now comes the hardest part of the whole recipe: assembling the cake. The baked dough is very soft, which can make this difficult. My mom used to have a gadget called a "cake saver" that was basically a flat round disk with a handle on it. It would have been useful for this recipe, but I didn't have one.

But one thing at a time: first we'll select the most stable layer of the cake. This will be the bottom, and we'll spread the chocolate on it first. If you shut off the burner with the water bath soon enough, the chocolate will be a bit more viscous and much easier to spread. Once the first side of the cake is completely and generously covered with chocolate, place the second layer on top of it. If you don't have a "cake saver" or similar tool, you won't be able to move a layer once you've added it to the cake. The good thing about all this is that it won't hurt the quality or appearance of the cake if the layers crumble. The chocolate will stick everything together perfectly. Once you get the final layer pieced together, it's easier to get a smooth surface on top of the cake. If it doesn't work, you can compensate with the chocolate to make it appear even. This will work quite well if you let the chocolate cool briefly on the cake. Spread chocolate on the sides of the cake with a knife.

Now you might notice that we've made too much brittle. That's okay, because it will keep for several weeks. You may have some leftover chocolate, too. Mix the two, spread them on a cookie sheet lined with baking parchment, and store in the refrigerator. Almond-brittle chocolate tastes wonderful with espresso.