The following torte is a great way to impress your in-laws when they come over for dinner. They'll never worry that their son or daughter isn't eating well!

For our cake we'll make a double-layered base. The idea here is that a thick bottom crust would become too hard while baking. So instead, we'll bake 2 thin crusts (almost as fast as a thicker one) and stick them together with some delicious jam. This will also make the cake juicier.

To make the dough, simply combine almond flour, gluten, butter, 1 dsp sweetener, and 6 tbsp water, then knead until everything is thoroughly mixed. We won't let the dough rest the way we normally would with pastry dough, since it will be easier to roll out this way. Divide the dough into 2 parts. Press each half into the bottom of a Springform pan, roll it flat with a rolling pin, and bake each at 400° F (200° C) for 10 minutes.

While the crusts are baking, puree the blueberries with a hand mixer. Put 5 tbsp of the pureed berries into a pot and boil down for about 10 minutes. Stir well so that they won't burn. Then add 2 dsp sweetener and 2 crushed sheets of gelatin. 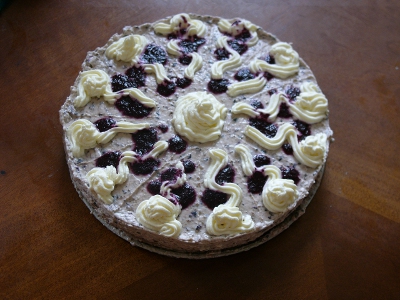 Once the crusts are finished baking, spread the bottom one with the jam (reserving a little jam to decorate the top of the torte) and then lay the second crust on top of the first. Place the 2 crusts in the bottom of the Springform and attach the ring.

Now we'll move on to the cream cheese and blueberry layer. First, beat 2 cups fresh cream. (Don't use homogenized cream.) Keep some of the cream for decorating the top of the cake. Then add 4 gelatin sheets, 200 g_(8 oz) cream cheese, and the rest of the berries and gently stir with a spoon until smooth. Sweeten with 2-4 TL sweetener, depending on your taste and the sweetness of the berries. Pour the mixture over the crusts in the Springform and smooth the surface. Now the torte goes into the refrigerator. After 1 hour it will have set and can be served. Before removing the ring from the Springform, run a knife around the edge so that it won't stick. 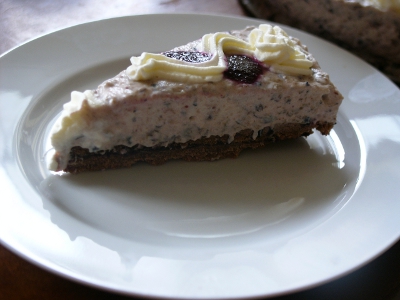 Decorate the top with the remaining cream and blueberry jam. I added a little Cognac to the jam to make it smoother.