For a long time my wife has been asking me to make a Kirschmichel, one of her favorite treats from childhood. She raves about how the cherries were baked together with the batter, making the dessert taste wonderfully juicy and fruity. 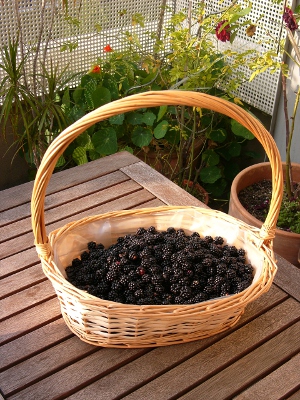 Literally translated, Kirschmichel means "Cherry-Michael". So what's a michael? It's a dessert that falls somewhere between a souffle and a cake. When my wife's mother made them, the michaels were always eaten while they were still warm. When we researched how many carbs cherries contain, the news disappointed us. 16%, almost as much as bananas! Sour cherries are not really a good alternative, since they're 10% sugar. And in order to taste good, a cherry-michael needs to have a lot of cherries in it.

While walking our dog Oso last week, we discovered a large wild blackberry bramble. (Blackberries are only about 5% sugar, even less if they're growing wild.) The bushes were so heavy with fruit that the thorny branches bent, and in a little while we filled a large basket with berries. I decided to surprise my wife: "Why don't we make a blackberry-michael today?" She was very excited.

From now on, the electric mixer is taboo; we'll just stir gently with a spatula. When everything is evenly mixed, sift almond flour, ground hazelnuts, and the gluten into the bowl. Continue to stir gently. 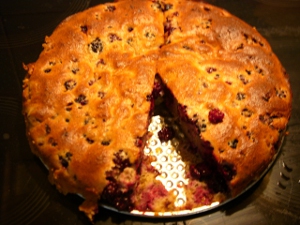 The batter should now be creamy and easy to spread. Finally, add the blackberries. The special thing about a michael is that the fruit isn't added after baking, but stirred into the batter beforehand. If you have particularly sour blackberries or just want a sweeter cake, add sweetener (2-3 TL liquid sweetener, 2-3 EL Sukrin, or some Stevia). Pour the batter into a greased Springform pan and bake at 400° F (200° C) for 45 minutes. Don't open the oven door for the first half hour. After that, check regularly to make sure your michael isn't getting too brown.

The michael will taste best warm, about 15 minutes after it comes out of the oven. Our idea of replacing cherries with blackberries was a complete success. The berries were juicy enough to give the cake the perfect moist consistency. We froze the leftover berries so that we can enjoy another michael when blackberry season is over.