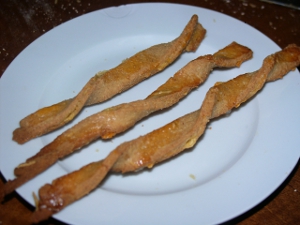 My first attempt at low-carb breadsticks took place six months ago. It was a rainy Sunday, and I was in the mood to experiment. The results could have been used to build a house, but they weren't fit to eat. They were tasty when they came out of the oven but turned as hard as a rock within minutes. I'd used only gluten to make the dough and quickly learned why the German word for gluten means "wheat glue". Forget rolling it out thin: after one pass with the rolling pin, the dough would pop back into its original shape. As a last resort I took a sharp knife and sliced the lumps of dough as thinly as possible. Even then, only the thinnest parts of the finished breadsticks were edible. The rest were a serious threat to dental health.

But now for today's successful attempt: the ideal mixture for crispy breadsticks is one part nut flour to two parts gluten. With this ratio the dough is relatively easy to shape (I'll explain why later), the breadsticks don't take long to bake, and they taste fantastic. And the consistency is what you expect from breadsticks: a little crumbly but still crisp. To start, sift the almond flour and gluten together in a bowl. Add 1/4 to 1/2 TL salt and stir in the other dry ingredients until they're well mixed. Next, add 1 full egg and the white of the second egg (we'll brush the yolk onto the breadsticks later). Add the butter (it's best to take it out of the fridge half an hour beforehand) and quickly knead to form dough. This dough has the best consistency of all the low-carb dough recipes I've tried so far. After a little kneading, it won't stick to the side of the bowl or even to your fingers. 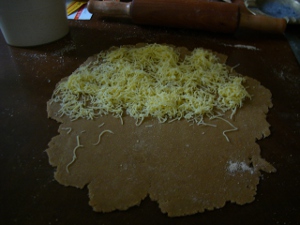 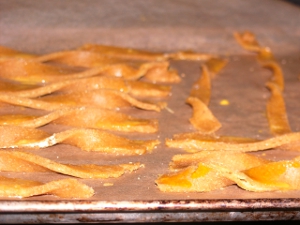 Its only drawback is that it sticks to the work surface when you roll it out. To prevent this, we thoroughly and repeatedly sprinkled the table and rolling pin with almond flour. Other than that, rolling out the dough isn't difficult. When it's rolled out very thin, spread the grated cheese on one half and then fold the other half of the dough over it like a taco. Now roll it flat again until the surface of the dough is back to its original size. Cut into 1-cm-wide strips and lay them on a cookie sheet. I twisted the strips to give them a spiral shape. And what did they do? They untwisted themselves! I had to fight with the dough quite a bit to get it to do what I wanted. Some of the breadsticks were so uncooperative that they untwisted themselves again in the oven. But I did get a few near-perfect specimens, as you can see from the picture. Brush breadsticks with the egg yolk and then bake at 175° C for 15 minutes.

After half an hour's work, our crispy cheese breadsticks are finished. Even with all the trouble they gave me, they're delicious!