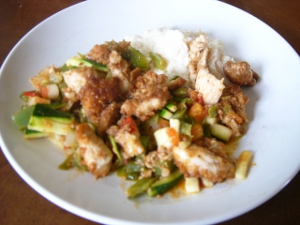 It seems like one of the first dishes ever low-carb fan attempts is a vegetable stir-fry. Good olive oil, tomatoes, pepper, green onions, zucchini...it's delicious even without sauce. But if you eat it too often, it will get boring. That's what happened to us, and so stir-fry gradually disappeared from our menu. After two years on our low carb diet my wife said she missed it, so we went back to eating stir-fry. The problem was, I found it a little boring to cook, too. The compromise: I was allowed to try out two new variations. The result is the following recipes. One is Spanish-style, and the other borrows from Asian cuisine.

When you hear "Spanish cuisine", sausage probably isn't the first thing that comes to mind. But on our trip to Spain I ordered salchicha (when I'm abroad, I like to order foods I've never heard of in restaurants) and was served sausage in a wonderful vegetable sauce. They tasted so good together that I want to share my (hopefully successful) attempt to recreate the dish. 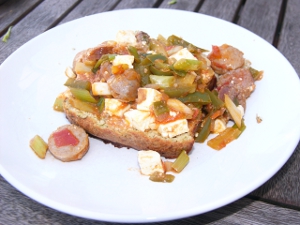 First, sear 2 sausages on both sides in a skillet with oil. When they're nicely browned, remove the sausages and cut them into thin slices. If they're not totally done on the inside, it doesn't matter; they'll be cooked through by the time you're done. Add the finely chopped onions and garlic to the pan (NOTE: do not, under any circumstances, wash out the skillet between steps). When these start to turn translucent, add the chopped pepper and sliced scallions. Fry over high heat for 5 minutes, then add the tomatoes (cut into dice-sized pieces). Now that we've made some sauce for them, we can put the sausage slices back into he pan. At the very end, stir in the soft cheese. (I've been looking for Spanish cheese but can't find any. A nice soft brined cheese with 60% fat will work just as well.) Cover the skillet and let simmer until the cheese begins to melt. We had a tasty vegetable bread with our Spanish stir-fry. 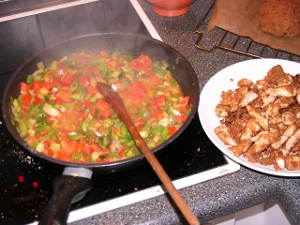 Turkey meat in stir-fry can often be tough and a bit dry. Asian cooks have found a solution for this by frying the poultry separately and breading it beforehand. For this, we'll mix 2 eggs with soy sauce and chili powder. Let the sliced turkey breast marinate in the mixture for 30 minutes and then roll it in almond flour. We'll add a halved stalk of lemon grass to the frying pan, along with some olive oil, and fry the breaded turkey until it's golden brown. Then remove the turkey and cook the vegetables as directed in the section for Spanish Stir-Fry. If you want, you can use soy sauce instead of salt. Season the vegetables with chili, and finally, don't forget to remove the lemon grass from the pan. Finally, return the turkey to the skillet. Don't stir it in; just lay it on top of the vegetables. Cover the pan and let everything stew for 2 more minutes.

A delicious variation, especially with the buttery tenderness of the meat. The low-carb breading makes it a very satisfying meal. We had Celery Root Puree as a side dish.