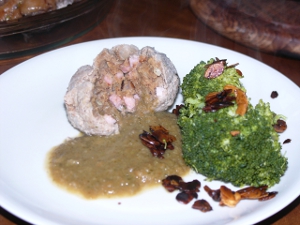 When I claim that I've been eating low-carb for three years, that's not entirely true. There are exceptions, especially when traveling; the chance to try new foods in foreign countries is just too exciting. My wife is much more consistent since her blood sugar can go haywire if she eats more carbs than usual. She had problems with hypoglycemia before going low-carb, leading to situations where she needed to eat right away but had no food on hand. That no longer happens now that she's on a low-carb diet, but it can come back if she makes an exception and eats carbohydrates. I don't have that problem, so on vacation I can try new dishes that are high in carbs. Of course, I always try to recreate them in a low-carb version. The last time we went skiing, I enjoyed Tyrolean cheese noodles and bacon dumplings. If you've been reading this blog for a while you know that noodles are a weak spot for me, since my low-carb versions just haven't succeeded (yet). Dumplings are another story, and since my wife really likes them, I made these low-carb dumplings when we returned from our trip.

If you bake low-carb bread yourself, low-carb breadcrumbs are no problem. Just let some bread dry out and then grate it. In theory you could use protein bread, but it often uses a lot of leavening agents and so doesn't work as well. The taste of the crumbs also leaves a lot to be desired. We'll start by mixing together the dry ingredients for the dumplings: bread crumbs, gluten, and almond flour.

Dice the bacon and onions and fry them in oil. Let them cool, then add eggs and sour cream. Season with salt and nutmeg, then knead together with the dry ingredients to form dough. The dough shouldn't stick to the side of the bowl. If it's too wet, add a little more almond flour. Then form 8 dumplings. 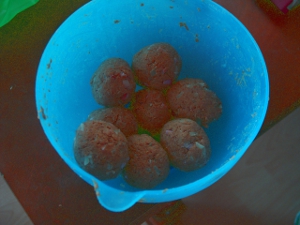 Fill a large pot with water, salt it lightly, and bring it to a boil. Then immediately turn the heat down to the lowest setting. When the water is no longer bubbling, put the dumplings into the pot and let them simmer for 1 hour.

These dumplings are traditionally eaten with sauerkraut (Austrians also add bacon bits to the sauerkraut). That way, the dumplings won't need any sauce. They also make an excellent side dish with a roast and vegetables. The taste was so close to the original that when we finished eating, we felt ready to hit the ski slopes!