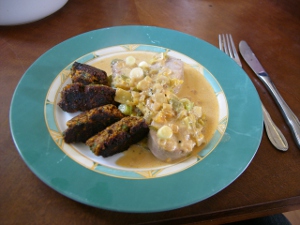 My wife had the idea of making pumpkin for dinner tonight - "But not soup; that's too boring!" While brainstorming over breakfast, I realized that pumpkin could be used to make something like falafel. I also wanted to use a recent discovery of ours, coarsely-ground flaxseed flour. With this in mind, we went to the grocery store. There was a great selection of pumpkins. We decided on an especially aromatic variety. Then we went to the butcher's counter. I couldn't pass up the pork loin. We hadn't had it for a long time and I wanted to try it with a light Mediterranean sauce. But then we had a problem: Arab falafel with pork? That wouldn't be a good combination - the taste, maybe, but not the name. Thankfully my wife came up with a solution: "We'll call it croquettes instead of falafel." Even if they're not technically falafel, I couldn't resist adding fresh cilantro to the croquettes.

We'll start with the pumpkin. Remove the insides and the shell and cut the pumpkin flesh into dice-sized pieces. Place the pumpkin in a pot with just enough water to cover it. Add 1 dsp salt and boil for no longer than 7 minutes. Then drain the pumpkin in a colander, saving the water (it makes a great base for soup). Let the pumpkin cool in the colander. For the next steps, it's important for the pumpkin to be lukewarm at most. We also want to drain as much of the water as possible.

While the pumpkin is draining and cooling, we can cut the pork loin into 3-cm pieces. Press them somewhat flat and then sear on both sides in hot oil for about 2 minutes. After they are browned, salt and pepper them on both sides. Remove pork from the pan and then, without washing the pan, use it to fry the onions until they're translucent. Deglaze with broth, then add diced tomatoes and half of the sliced scallions. Cover and let simmer for about 20 minutes.

In the meantime, puree the pumpkin and add 2 eggs, gluten, and flaxseed flour. Stir briskly. Season with 1/2 dsp salt, a very small amount of chili powder, and nutmeg. 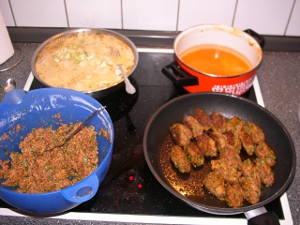 Before we return to the croquettes, add the cream to the sauce and return the pork to the pan. Add thyme and season to taste. Then the sauce can simmer over very low heat until the croquettes are ready.

Croquettes turn out best when you use a deep fryer. Like most households, we don't have one, so we'll make do with the pan. It takes longer but doesn't make a difference in the taste. Shape the pumpkin mixture into thumb-sized sausages and brown them on all sides. Unlike many of the almond-flour-based recipes we've made, the pumpkin croquettes don't burn very easily. They quickly form a nice crust that keeps them from falling apart. Add the remaining scallions to the sauce shortly before serving.

This wonderful dish unites the cuisines of many countries: traditional German pork loin with a Mediterranean-style sauce and croquettes inspired by Middle Eastern falafel. Of course, we could have replaced the pork loin with poultry to make an Asian-style meal. But chicken or turkey won't become as tender and flavorful as the pork when cooked in the sauce.